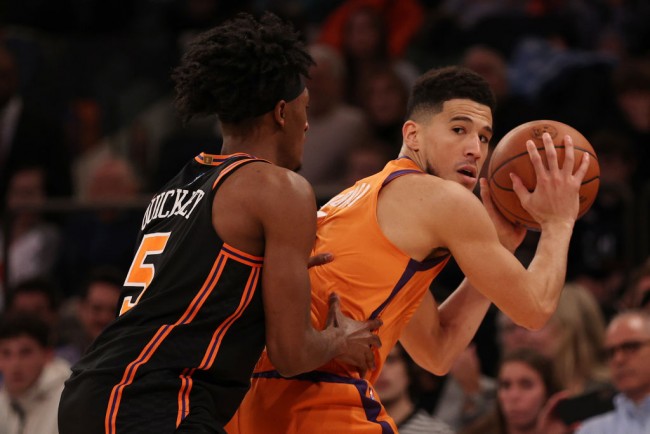 The Phoenix Suns stretched their unbeaten run to 15 games with a comprehensive 118-97 win over the New York Knicks at Madison Square Garden. Seven players scored in double-figures for the Suns, who moved to within a half-game of leaders Golden State Warriors in the Western Conference standings.

The Suns’ 15-game winning run matches the second-longest streak in team history. Phoenix also won 15 games in a row from November to December 2006. That 2006-07 team also won a franchise-best 17 consecutive games later that season. Phoenix’s current winning run is the fourth-longest streak by a side that lost in the previous season’s NBA Finals all-time.

Devin Booker stole the show in the Big Apple, scoring a game-high 32 points on 14 of 27 shooting from the field. Booker scored 21 of his 32 points in the first half, helping Phoenix open up a 57-44 advantage after the first two quarters. During that period, the Suns were red-hot, shooting at a high 53 percent clip with 24 made field goals.

The Suns continued to pile on the pressure in the second half, extending their lead to 24 points at one stage. All evening long, Chris Paul and Deandre Ayton punished the Knicks’ defense, with both players registering double-doubles. Paul scored 14 points and dished out 10 assists, while Ayton had 14 points and 13 boards.

The outstanding play of the Suns’ Big Three has been crucial for Phoenix on the road. This season, the Suns have the best away record in the league, winning eight of their first nine road games, including their first three outings on this four-game road trip. They will face their toughest test, though, on Saturday as they will meet the Eastern Conference-leading Brooklyn Nets in their road trip finale.

Knicks’ struggles at MSG continue with blowout loss to Suns

It was another disappointing defeat for the Knicks, who have now lost their last seven meetings with the Suns. The Knicks missed the services of Derrick Rose, who was sidelined for a second straight game due to a sprained right ankle. New York’s starters had a horrible shooting night, combining for just 54 points.

Julius Randle managed just nine points on 3 of 8 shooting from the field, while RJ Barrett shot 30 percent from the floor and scored a measly 10 points. Evan Fournier missed 11 of his 15 field-goal attempts and finished with just 11 points.

The Knicks have been woeful at home this season, posting a 5-6 record at MSG. They will look to get their season back on track on Saturday when they travel to Georgia to face the Atlanta Hawks. The Hawks have been in fine form at home, winning eight of their first nine games at State Farm Arena this season.

What will the Year 2021 do with AI Influencers through Advanced Technologies?