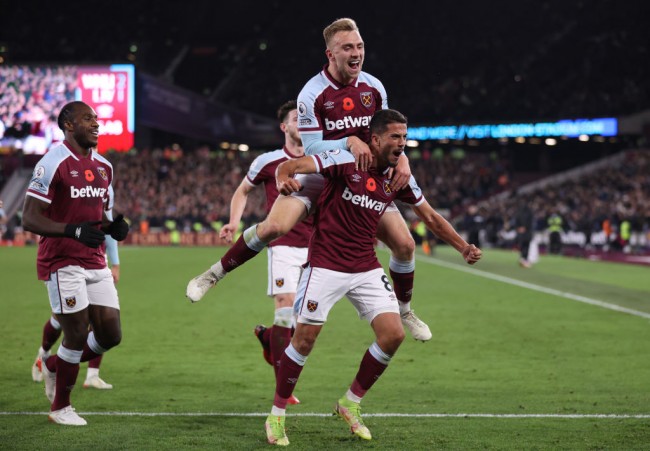 West Ham and Manchester City gained some ground on title rivals Liverpool and Chelsea after the Reds and the Blues dropped points in Week 11 of the Premier League. West Ham defeated Liverpool in a high-scoring encounter while Manchester City eased past Manchester United at Old Trafford. They took full advantage of Chelsea’s draw against Burnley on Saturday.

West Ham barged into the top 3 of the Premier League table after a heart-stopping 3-2 win over Liverpool at London Stadium. It was a huge victory for the Hammers, who denied the Reds a record-setting unbeaten mark of 26 games. This was West Ham’s first victory against Liverpool since the Hammers recorded a league double over the Reds in the 2015-16 season.

West Ham made a dream start in this matchup, opening the scoring in the fourth minute via an own goal by Liverpool goalkeeper Alisson. He diverted Pablo Fornals’ corner into the back of his own net after he was put under pressure by West Ham’s Angelo Ogbonna.

Liverpool managed to level the score before the half-time break with Trent Alexander-Arnold curling home a superb strike. Momentum swung back in favor of West Ham when they scored two goals in a seven-minute span in the second half.

Fornals restored West Ham’s advantage in the 67th minute, drilling a low shot past Alisson after he was slipped through on goal. The Hammers doubled their advantage in the 74th minute when Kurt Zouma scored a header off their corner kick.

Liverpool pulled one goal back in the 83rd minute courtesy of a fine finish by Divock Origi, setting up a tense finale. West Ham managed to hold on for the victory to move to within three points of leaders Chelsea in the league table.

City prevails over United in battle of Manchester

Manchester City also gained some ground on Chelsea after a convincing 2-0 win over archrivals Manchester United at Old Trafford. The Citizens made an excellent start, grabbing the lead in the seventh minute courtesy of an own goal by United defender Eric Bailly, who made a disastrous clearance on Joao Cancelo’s cross.

City piled on the pressure after that opener but United held firm thanks to the brilliance of goalkeeper David de Gea. He made a string of brilliant saves in the first half to keep the score at 1-0. Bernardo Silva finally put one past de Gea just before the half-time break, cashing in on Cancelo’s cross at the far post.

City controlled proceedings in the second half as they settled for the 2-0 win. They moved up to second place with the victory. The pressure is once again mounting on manager Ole Gunnar Solskjaer after another awful display by the Red Devils at home. They have scored just one point in their last four league games at Old Trafford.