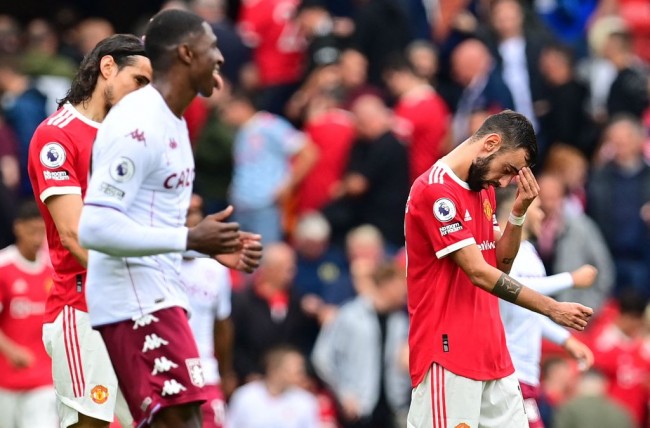 Liverpool became the last remaining unbeaten side in the Premier League after Manchester United and Chelsea suffered stunning defeats in Week 6 of the 2021-22 season.

After a hard-fought draw at Brentford, the Reds grabbed sole possession of the top spot, taking their tally to 14 points. The title race is heating up, though, with five teams caught in a logjam at second place, all of them trailing Liverpool by just a single point heading into Matchday 7.

Manchester United lost a game at Old Trafford for the second match running with Aston Villa recording a famous 1-0 victory in the Premier League on Saturday. It was a disappointing defeat for the Red Devils, who lost days earlier to West Ham at home in the Carabao Cup.

Kortney Hause broke the Red Devils’ hearts in the closing stages, scoring a header in the 88th minute to give Aston Villa the lead. There was a late twist, though, with United getting a penalty after Edinson Cavani’s header struck Hause’s arm during the second-half stoppage time.

Bruno Fernandes failed to salvage a point for United blasting his spot kick way over the bar. It was just his second miss from the penalty spot in 23 attempts for United in all competitions. Saturday’s defeat was Manchester United’s third loss in their last four games.

Thomas Tuchel got his lineup wrong in this match, with the Blues starting three defensive-minded midfielders in Jorginho, Mateo Kovacic, and N’Golo Kante. That played into the hands of Manchester City, who not only dominated possession the entire contest but also had a sizable advantage in terms of shots on target.

It was a morale-boosting win for manager Pep Guardiola as City finally snapped their three-game losing skid against Chelsea. With the victory, City jumped into a tie for second place with Chelsea, Manchester United, Everton, and Brighton.

Reds move one point clear at the top after Brentford draw

Liverpool missed a golden opportunity to go three points clear of their nearest rivals in the Premier League table as the Reds were held to a 3-3 draw by Brentford on Saturday. Yoane Wissa scored a late equalizer in the 82nd minute to deny Liverpool the victory.

Wissa’s late strike took the shine away from Mo Salah’s achievement in the 54th minute when he scored his 100th goal in the Premier League. The Egyptian star is just the 13th player in club history to reach a century of league goals for Liverpool.

Top Robotics Communities and Forums to Sign in For