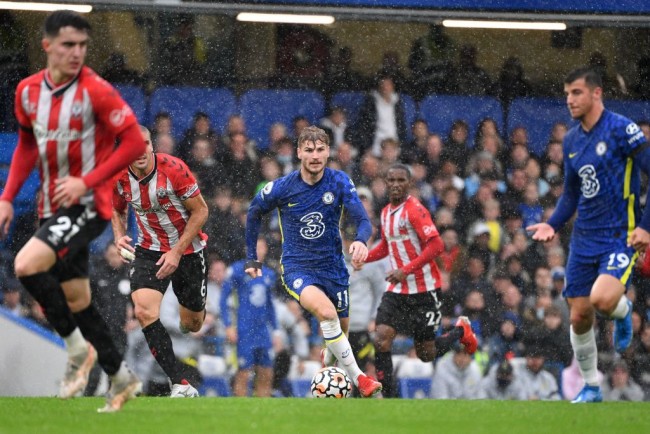 Chelsea regained the Premier League lead after a dramatic victory over Southampton in Week 7. The Blues grabbed sole possession of the top spot after title rivals Manchester City and Liverpool battled to a draw on Sunday.

On Saturday, Chelsea scored twice in the final six minutes of regulation to record a 3-1 win over struggling Southampton and moved to the top of the Premier League table. It was a big win for Thomas Tuchel’s men, who finally snapped a two-game losing skid.

Trevoh Chalobah opened the scoring in the ninth minute, with the Academy product connecting on a header for his second goal of the season. The Blues continued to dominate in the first half, but unfortunately, two of their goals were ruled out. Offside was called on Romelu Lukaku during his scoring effort while the VAR voided Timo Werner’s headed goal after Cesar Azpilicueta was deemed to have fouled Kyle Walker-Peters in the build-up.

The Blues were made to pay for those missed chances as Southampton equalized in the 61st minute via a goal by James Ward-Prowse. He converted the penalty after Ben Chilwell inside the box tripped Tino Livramento. Ward-Prowse’s joy turned to horror, though, just 16 minutes later after he was handed a straight red card for a poor challenge on Chelsea midfielder Jorginho.

The Blues went for the kill with the Saints down to 10 men. Werner gave Chelsea a 2-1 lead in the 84th minute after connecting with Azpilicueta’s low cross. Chilwell doubled Chelsea’s advantage in the 89th minute with a solid strike to ensure victory for the Blues.

Liverpool, Manchester City, cancel each other out in 2-2 draw

Liverpool and Manchester City failed to go to the top of the Premier League table after both teams canceled each other out in a thrilling 2-2 draw on Sunday. Kevin de Bruyne scored a deflected equalizer in the 81st minute to earn Manchester City a deserved point.

In the second half, the match sprung into life after Sadio Mane broke the goalless deadlock with a clinical finish in the 59th minute to give the Reds a 1-0 lead. That advantage didn’t last long, with Manchester City tying things up via a Phil Foden strike. He took a fine pass from Gabriel Jesus before firing an exquisite low, angled finish past Liverpool keeper Alisson.

Momentum swung back in Liverpool’s favor in the 76th minute after Mo Salah scored one of the best goals of the young Premier League season thus far. The Egyptian star slalomed his way past many City defenders before dispatching a powerful finish to give the Reds a 2-1 advantage.

Salah’s joy was short-lived, though, as City netted the final goal of the contest with De Bruyne’s effort finding the back of the net after taking a wicked deflection off Joel Matip.