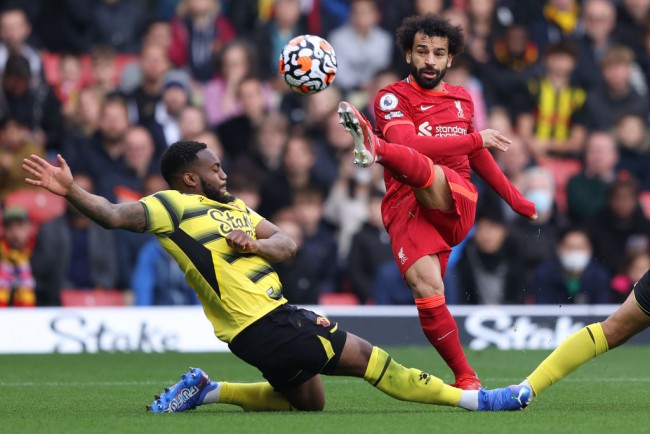 WATFORD, ENGLAND – Mohamed Salah of Liverpool takes a shot as Danny Rose of Watford FC attempts to block during the Premier League match between Watford and Liverpool at the Vicarage Road on October 16, 2021 in Watford, England. (Photo : Richard Heathcote/Getty Images)

Chelsea, Liverpool, and Manchester City continued their winning ways on Matchday 8 to remain on top of the Premier League table. They have started to create a gap from Manchester United after the Red Devils lost to Leicester City over the weekend.

Chelsea remained in first place after a gritty 1-0 victory over Brentford on Saturday. Ben Chilwell was the hero for the Blues, scoring the game’s lone goal in the 45th minute. Chilwell has been red-hot of late, scoring in his last three Premier League games for Chelsea.

The victory did not come easy for the Blues, who faced the Bees in the league for the first time in 74 years. Brentford threw everything at Chelsea in the final 15 minutes as they searched for the equalizer, with Blues keeper Edouard Mendy making two crucial saves and defender Trevoh Chalobah also clearing off the line.

Liverpool recorded the biggest win in Week 8, as the Reds trounced Watford, 5-0, at Vicarage Road. Roberto Firmino ran roughshod over the Watford defense, scoring a hat-trick to hand Claudio Ranieri a humiliating loss in his first game as manager of the Hornets.

Sadio Mane made history in this contest when he opened the scoring in the eighth minute. He became the third African player to rack up 100 goals in the Premier League, joining former Chelsea striker Didier Drogba and Liverpool teammate Mohamed Salah in that exclusive list.

A goal that 𝐧𝐞𝐞𝐝𝐬 to be seen from every angle 💫🤩@MoSalah’s display of individual brilliance, presented by @Sonos 🎥 pic.twitter.com/eg2hyPWBHA

Salah also scored a stunning goal in this one-sided win to go level with Drogba as the highest-scoring African player in the history of the Premier League with 104 goals. Salah and the rest of the Reds have been unstoppable on the road to start the season, scoring at least three goals in all six away games they have played in all competitions thus far in this campaign.

Manchester City continued their dominance over Burnley, winning 2-0 in their Premier League encounter on Saturday. The Citizens have now won their last five games against the Clarets at the Etihad Stadium, outscoring them 22-0 during that span.

Bernardo Silva opened the scoring for City in the 12th minute, following up Phil Foden’s attempt to give the home side an early advantage. Kevin De Bruyne doubled City’s lead in the 70th minute with a fantastic curling shot inside the box.