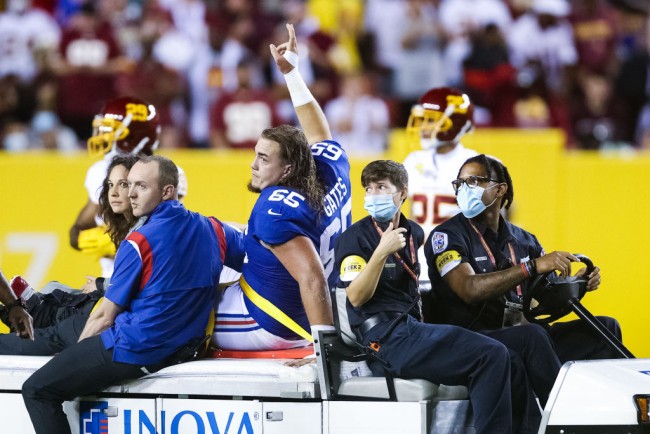 LANDOVER, MARYLAND – Nick Gates (#65) of the New York Giants exits the game following an injury during the first quarter against the Washington Football Team at the FedExField on September 16, 2021 in Landover, Maryland. (Photo : Rob Carr/Getty Images)

It’s tough being a New York Giants fan nowadays. Not only did the Giants suffer a heart-breaking 30-29 loss to Washington in Week 2, but they also lost one of the key members of their offensive line with Nick Gates ruled out for the remainder of the season after breaking his left leg in the first quarter of that contest.

Gates’ injury happened with 5:57 left in the opening quarter when he got tangled with Jonathan Allen, Washington’s defensive tackle. Gates immediately went writhing in pain as he tossed his helmet aside, with medical personnel quickly rushing onto the field to tend to his injury. Such was the horrific nature of the lower leg fracture that NFL Network chose not to show the replay of the said incident.

Gates a huge loss to Giants this 2021 season

Coach Joe Judge went to the middle of the field to comfort Gates, whose leg was placed in an air cast before he was carted off the pitch. Gates eased the fans’ concerns by waving to the crowd before paramedics took him to the locker room. Gates was later transported to a local hospital, where he remained overnight to receive more treatment.

Losing Gates is a major blow to the Giants organization, with Judge telling reporters that his loss is a gut punch to the team after the game. Gates has been a vital cog in the Giants’ offense, starting all 16 games at center last season.

He didn’t start at center, though, in Week 2, with the Giants opting to move Gates to left guard for the first time since 2019. Two years ago, he made just one start for the Giants at that position, helping New York grab a 36-20 victory over Miami in Week 15. Running back Saquon Barkley wreaked havoc in that contest, rushing for 112 yards and a couple of touchdowns.

Judge made the switch this time around as starting left guard Shane Lemieux was sidelined because of a knee injury. Lemieux tried to play through the knee problem in the season opener against the Broncos, but he could not finish the opening half and has now been placed on the Giants’ injured reserve.

The Giants elected to insert Billy Price into the starting center position for the game against Washington to address the loss of Lemieux. Price was just acquired by the Giants recently in a trade with the Cincinnati Bengals, with New York sending a conditional 2022 seventh-round pick and former third-round pick B.J. Hill to Cincinnati.

With Gates sidelined for the rest of the season, the Giants will move ahead with Price as their starting center in their injury-plagued offensive line, which is now down two starters and a captain after just two games in the 2021 campaign.

Data Analytics v/s Data Analysis: How do they Differ?