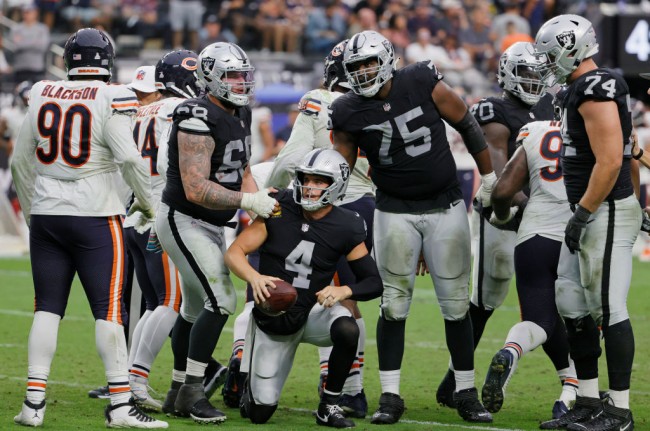 LAS VEGAS, NEVADA – Center Andre James (#68) and offensive tackle Brandon Parker (#75) of the Las Vegas Raiders help quarterback Derek Carr (#4) up after he was sacked by the Chicago Bears during their game at the Allegiant Stadium on October 10, 2021 in Las Vegas, Nevada. The Bears defeated the Raiders 20-9. (Photo : Ethan Miller/Getty Images)

A losing skid will end this Sunday as the Las Vegas Raiders and the Denver Broncos square off in a battle of 3-2 teams. Here’s a breakdown of this Raiders vs Broncos match to see who has the edge in this pivotal AFC West clash.

It has been a rough couple of weeks for the Las Vegas Raiders, whose once-promising season is now unraveling. Not only had they lost their last two games against the Los Angeles Chargers and Chicago Bears, but the Raiders also parted ways with their head coach Jon Gruden. Reports surfaced of Gruden using racist, homophobic and misogynistic language in emails back in 2011 while working for ESPN as an analyst.

The controversy surrounding Gruden was an unwelcome distraction for the Raiders, who were affected by the whole ordeal in their Week 5 loss to the Bears. In that defeat, the Raiders looked out of sorts, recording just nine points against Chicago, their lowest scoring output this 2021 season.

For the Raiders to snap their two-game losing skid, they will need Derek Carr to rediscover his form at the start of the season. He struggled mightily against the Bears, completing just 22 of 35 passes for 206 yards with no touchdowns and one interception. He had thrown for 1,203 yards and six touchdowns in his first three games for the Raiders this season.

Things are going from bad to worse for the Denver Broncos as they crashed to their second consecutive defeat with a 27-19 loss to the Pittsburgh Steelers in Week 5. The Broncos wilted before Najee Harris, who ran for a career-high 123 yards and a score on 23 carries.

For the first time this season, the Broncos dropped out of first place in the AFC West, with Denver now trailing the Los Angeles Chargers by a game with their 3-2 record. It won’t get any easier for them in Week 6 as they will next face division rivals Las Vegas. The Broncos have struggled against the Raiders lately, losing four of their last five meetings.

The Broncos must get a good start against the Raiders in this game. They trailed in the opening quarter in three of their first five games this season. The Broncos also trailed at the half-time break by double digits during their losses to Baltimore and Pittsburgh the past two weeks.

Las Vegas wins on the road against Denver.

Top Blockchain Jobs in India to Apply this October Weekend