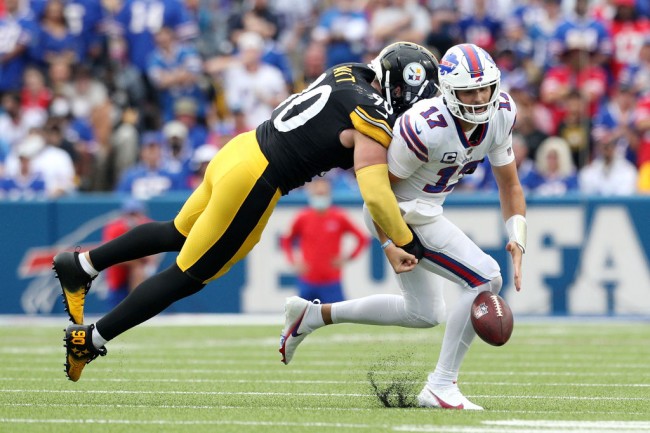 Something’s gotta give. The Pittsburgh Steelers and the Las Vegas Raiders will put their unbeaten records on the line when they square off this coming Sunday at the Heinz Field. Who among these teams will post a 2-0 record after Week 2? Read on below for a breakdown of this game.

The Pittsburgh Steelers will head into their Week 2 clash against the Las Vegas Raiders with momentum on their side after beating the Buffalo Bills in their season opener. The Steelers overcame a slow start in that contest, turning a 0-10 half-time deficit into a 23-16 victory at the end.

Providing the spark for Pittsburgh was its stellar defensive unit. T.J. Watt showed why he is deserving of the huge contract he signed just days before the start of the season, recording two sacks and a forced fumble. The Steelers also managed to keep the Bills’ passing attack in check late on, stopping Josh Allen on fourth down on each of Buffalo’s first two possessions of the second half.

However, they will have their work cut out for them against a Raiders team that racked up 491 total yards in their Monday night win against Baltimore. The Steelers must get their offensive game going quickly against Las Vegas to help support their defense.

Ben Roethlisberger started poorly in Week 1 as the Steelers managed just three first downs and 53 yards through the first two quarters. He began to find his groove, though, in the second half, leading Pittsburgh to a score on each of its first four possessions that swung the game in the Steelers’ favor.

Injury problems are mounting for coach Jon Gruden ahead of the Raiders’ Week 2 showdown with Pittsburgh. Starting right guard Denzelle Good has been ruled out for the season after suffering a torn ACL in his left knee in Las Vegas’ 33-27 victory over Baltimore on Monday night.

It is a massive loss for the Raiders, who signed Good to a two-year deal worth $8.4 million with $3.2 million guaranteed this past offseason. Good played in 15 games for the Raiders last season, making a career-best 14 starts (12 at left guard and two at right tackle).

Good’s play was so tremendous last campaign that Gruden and quarterback Derek Carr paid him the ultimate compliment by naming him the team’s MVP. That player will not be suiting up for the Raiders anymore this season after picking up a knee injury in the first half.

He initially went down on Vegas’ seventh play of the game but later returned to play ten more snaps before Good was finally shut down. Thankfully for Gruden, backup Jermaine Eluemunor stepped up big time in his place. He played 69 snaps on offense and four on special teams against the Ravens.

Steelers win and cover the spread.