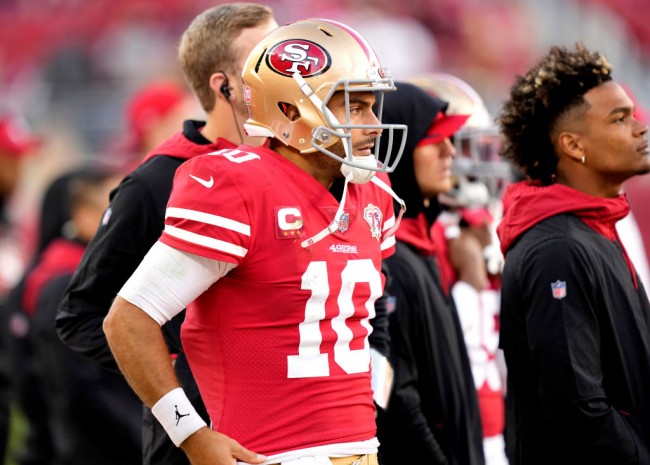 SANTA CLARA, CALIFORNIA – NOVEMBER 07: Jimmy Garoppolo #10 of the San Francisco 49ers looks on from the sideline during the fourth quarter against the Arizona Cardinals at Levi’s Stadium on November 07, 2021 in Santa Clara, California. (Photo : Thearon W. Henderson/Getty Images)

San Francisco has not tasted success at home thus far this season, with the 49ers losing all of their four games at the LeVi’s Stadium. They will look to end that losing skid in Week 10 when they host the Los Angeles Rams on Monday Night Football. Read our preview to see who has the edge in this Rams vs 49ers showdown.

The Los Angeles Rams had their three-game winning streak snapped in Week 9 with a stunning 28-16 loss to the Tennessee Titans on Sunday Night Football. It was a disappointing defeat for the Rams, who again trail the Arizona Cardinals by one game in the NFC West standings.

The Rams lost the game in the second quarter when the Titans outscored them 21-0. 14 of those points came off back-to-back interceptions by Matthew Stafford. He recorded his first pick when he tried to avoid the safety, throwing a desperate pass instead to Tennessee’s David Long Jr.

The Titans took full advantage of that miscue, scoring a touchdown on the next snap. Stafford compounded his woes on the following possession, throwing an interception to Kevin Byard Jr., who returned it for his first career pick-six. It was Stafford’s 24th career pick-six in the NFL, the most among active quarterbacks.

Stafford found the going difficult against a Titans defense which harassed him all evening long. He was sacked five times by the Titans, three of which came from Jeffery Simmons. It did not help matters that the Rams were penalized 12 times for 115 yards, the most in Sean McVay’s career.

San Francisco’s losing woes show no sign of ending as the 49ers suffered a humiliating 31-17 defeat at the hands of the undermanned Arizona Cardinals in Week 9. The 49ers have now lost five of their last six games to drop to 3-5. They are losing ground fast in the NFC West as they trail the red-hot Arizona Cardinals by 4.5 games.

What makes the Week 9 defeat such a bitter pill to swallow for 49ers fans is that it came against an Arizona team that was missing several key players, including quarterback Kyler Murray, wide receivers A.J. Green and DeAndre Hopkins, and defensive end J.J. Watt.

The 49ers still had no answer for James Conner, who ran for 96 yards and two touchdowns and also caught a 45-yard touchdown pass from Colt McCoy. The Cardinals backup QB stepped up big time in Murray’s absence, completing 22 of 26 passes for 249 yards and one touchdown.

The 49ers will look to get their season back on track when they host the Rams. It is important for the 49ers that Jimmy Garoppolo delivers a solid game in this matchup. He completed 28 of 40 passes for 326 yards with two touchdowns and one interception in the loss to the Cards.

Cryptocurrency is Creating Millionaires in Q4 2021. Will it Last?