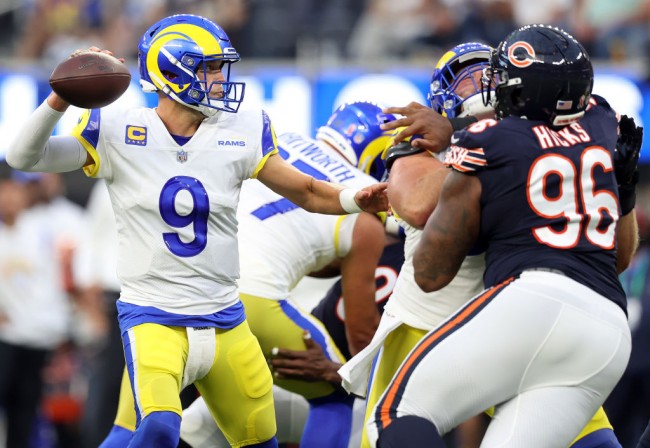 The Indianapolis Colts will look to get their first win of the season this coming Sunday when they host the Los Angeles Rams, who are flying high at the moment after a 20-point rout of Chicago in Week 1. Here’s our preview of the Rams vs Colts game at the Lucas Oil Stadium.

Los Angeles Rams fans can’t get enough of Matthew Stafford after delivering a scintillating debut performance in Week 1 against the Chicago Bears. He completed 20 of 26 passes for 321 yards and three touchdowns with no interceptions on Sunday night, earning a stunning 156.1 passer rating against the Bears.

According to NFL Research, Stafford’s passer rating in Week 1 is the highest in league history for a quarterback who recorded at least 20 pass attempts in his first game with a new team. He is also the first player in NFL history to win his team debut while passing for at least 300 yards, three touchdowns, and recording no picks.

The next stop of the Stafford show will be in Indianapolis this coming Sunday, with the Rams looking to win their second game in a row. Stafford will fancy his chances against a Colts secondary that allowed four passing touchdowns in the loss to the Seattle Seahawks.

Stafford has fared well against Indianapolis in his career, averaging at least 313 yards and two touchdowns in three previous meetings with the Colts as a member of the Detroit Lions. Last season, he produced impressive numbers against the Colts, throwing for 336 yards and three touchdowns with one interception and a fumble lost in a 41-21 loss to Indianapolis.

Indianapolis’ Week 1 woes continued on Sunday as the Colts suffered a disappointing 28-16 loss to the Seattle Seahawks. The Colts have lost each of their last eight season openers, the past five of which have come with different starting quarterbacks.

It was Carson Wentz who picked up the loss for the Colts this time around. The former Eagles quarterback finished his Colts debut with 251 yards and a couple of touchdowns. However, that performance wasn’t enough to overcome a Seattle side whose offense was firing on all cylinders. Wentz is now 0-6 in his career against the Seahawks.

The Colts will need to sort out their defense fast with the high-flying Rams coming to town this weekend. They will need to improve, particularly their tackling and coverage. The Colts had the lowest grade in tackling (31.5) and the second-lowest grade in coverage (44.8) among NFL teams in Week 1.

A repeat of that performance in Week 2 will spell trouble for the Colts. The Rams erupted for 386 total yards in the season opener, with Los Angeles scoring on six of Stafford’s first seven full drives against Chicago.

The rams win and cover the spread.

A Process that is Advancing the Dairy Farms