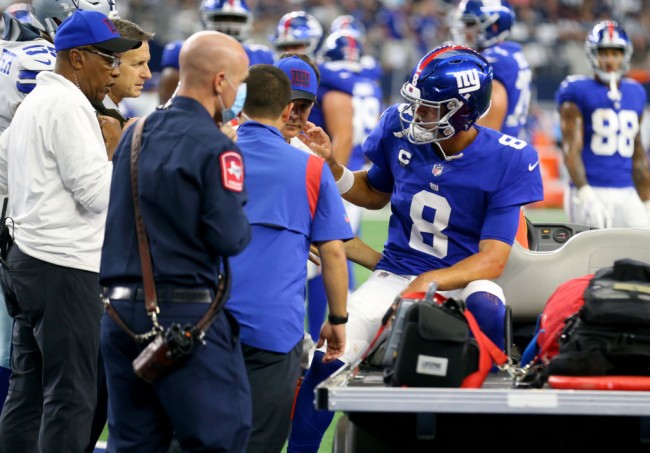 ARLINGTON, TEXAS – Daniel Jones (#8) of the New York Giants is carted off the field during the third quarter against the Dallas Cowboys at the AT&T Stadium on October 10, 2021 in Arlington, Texas. (Photo : Richard Rodriguez/Getty Images)

The New York Giants had a horrible time in Week 5, losing the game against division rivals Dallas and three of their main offensive players to various injuries. Can they record a major shock in Week 6 with their short-handed lineup and pull off the upset against Los Angeles in this Rams vs Giants showdown?

The Los Angeles Rams bounced back from their humiliating loss to the Arizona Cardinals in Week 4, beating the Seattle Seahawks in come-from-behind fashion on Thursday Night Football. Matthew Stafford sparked the comeback win for the Rams, who still trail the Cards by one game in the NFC West standings with their 4-1 record.

Remember when people said that Matthew Stafford was washed up?

Yeah. We don’t either.

The No look pass to Robert Woods for a first down 🔥 pic.twitter.com/IVXYjzkVly

The Rams now set their sights on a 5-1 start when they travel to the East Coast to face the struggling New York Giants. The Rams will have to navigate that showdown without starting cornerback Darious Williams, who was placed on injured reserve after spraining his ankle late in the 26-17 win over Seattle.

According to head coach Sean McVay, the Rams are still determining who would replace Williams in their starting lineup for the Giants game. Williams has started in all five of the Rams’ games this season, recording 29 tackles and two pass deflections during that stretch.

Williams’ injury is a huge blow to the Rams as he and Jalen Ramsey have been the permanent fixtures in Los Angeles’ three-cornerback scheme under first-year coordinator Raheem Morris. With Williams sidelined, the Rams may turn to either third-year pro-David Long or rookie Robert Rochell for the game against New York.

The New York Giants have some major injury concerns heading into their Week 6 clash with the Los Angeles Rams. The Giants did not only suffer a heavy 44-20 loss to the Dallas Cowboys in Week 5, but their offense was also decimated in that showdown, with three of their key players picking up injuries in that defeat.

The injury bug struck Saquon Barkley again, with the running back suffering a low-ankle sprain against the Cowboys. His injury was characterized as week-to-week, with Barkley set to miss Sunday’s game against the Rams.

Saquon Barkley turns his ankle after the play pic.twitter.com/wVIMVcKSZK

Also in danger of missing that critical showdown is Daniel Jones. The Giants quarterback hobbled off the field when he collided headfirst into a Cowboys defender as he tried to run the ball across the goal line for a touchdown. He was immediately ruled out of that game with a concussion and is a major doubt for the Week 6 game.

Kenny Golladay hyperextended his knee in the first quarter, adding to the woes of New York’s injury-plagued wide receiver group. In that contest, the Giants were without Sterling Shepard and Darius Slay and will now have to face the Rams sans Golladay, who is the team’s main wide receiver.

It is a nightmare scenario for the Giants, who may now start veteran Mike Glennon at quarterback, Devontae Booker at running back, and Kadarius Toney at wide receiver, for the Week 6 game against the Rams.

The Los Angeles Rams win and cover the spread.