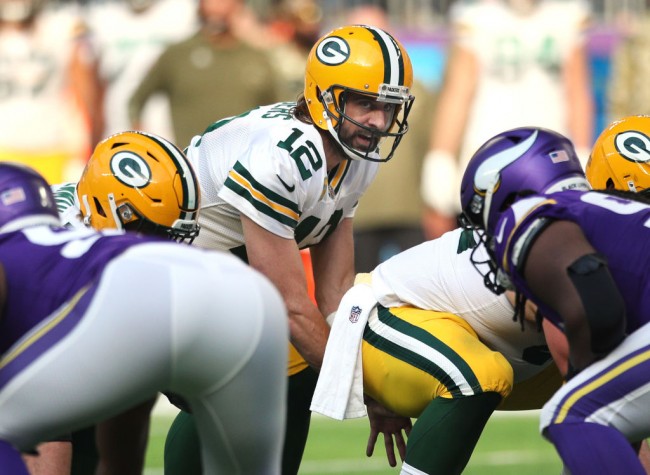 MINNEAPOLIS, MINNESOTA – Aaron Rodgers #12 of the Green Bay Packers calls a play at the line of scrimmage against the Minnesota Vikings in the second quarter at U.S. Bank Stadium on November 21, 2021 in Minneapolis, Minnesota. (Photo : David Berding/Getty Images)

This coming Sunday, two powerhouse NFC teams will face each other as the Green Bay Packers host the Los Angeles Rams in a Week 12 clash at the Lambeau Field. Who will prevail in this Rams vs Packers clash?

The Los Angeles Rams headed into their bye week in a state of disarray after suffering their second consecutive defeat in Week 10. They now trail the Arizona Cardinals by 1.5 games in the NFC West division after a humiliating 31-10 loss to the San Francisco 49ers.

It won’t get any easier for them in Week 12 as the Rams will face a Packers team that has won eight of its first 11 games this season and is the owner of the best record in the NFC North. It is crucial for the Rams that Matthew Stafford plays mistake-free football in this NFC matchup.

He struggled mightily against the 49ers, completing just 26 of 41 passes for 243 yards with one touchdown and two interceptions. Stafford was intercepted twice by Jimmie Ward on the Rams’ first two drives of the game. He has now thrown multiple interceptions in each of the Rams’ last two outings, both of which ended in double-digit defeats for Los Angeles.

The Rams felt the absence of Robert Woods, who has been ruled out for the remainder of the season after suffering a knee injury during practice. With Woods sidelined, the onus is on Odell Beckham Jr. to step up his game against Green Bay. He only caught two passes for 18 yards in his debut game for LA.

Injuries are mounting for the Green Bay Packers ahead of their blockbuster showdown with the Los Angeles Rams. On Sunday, offensive lineman Elgton Jenkins suffered a torn ACL in their 34-31 loss to the Minnesota Vikings, ruling him out for the remainder of the season. He has done an excellent job for the Packers at left tackle, filling in for the injured David Bakhtiari this season.

Jenkins’ injury is a major concern for the Packers, especially with Aaron Rodgers dealing with a toe injury that he described as very painful. The gravity of his injury was that Rodgers decided not to finish the first half and get treatment instead, with Jordan Love taking the snaps for Green Bay.

Several key players missed the game against Minnesota and are still major doubts for the Rams clash. Rashan Gary hyperextended his elbow against the Seattle Seahawks in Week 10 while Allen Lazard is dealing with a shoulder injury. Green Bay’s backfield also has been affected with running back Aaron Jones expected to miss 1-2 games because of a knee injury.