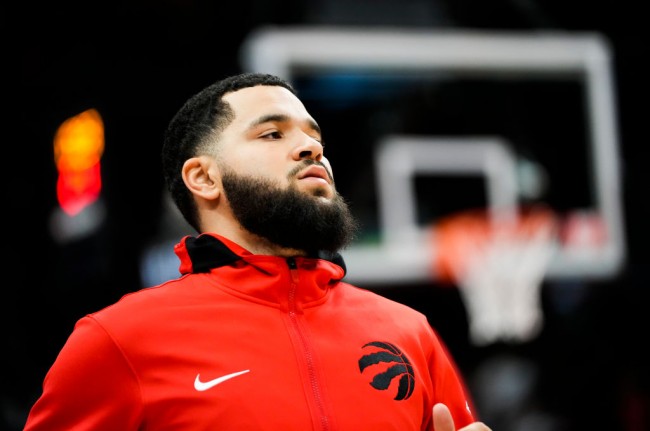 TORONTO, ON – Fred VanVleet #23 of the Toronto Raptors looks on during warm up before playing the Washington Wizards during their basketball game at Scotiabank Arena on October 20, 2021 in Toronto, Canada. (Photo : Mark Blinch/Getty Images)

Philadelphia’s losing woes show no sign of ending as the 76ers slumped to their third consecutive defeat with a stinging 115-109 loss to the Toronto Raptors. The Sixers are now 0-3 since star center Joel Embiid entered the NBA’s health and safety protocols after testing positive for COVID-19.

The Sixers got some reinforcements for Thursday’s contest with Seth Curry returning from a foot injury and Tobias Harris suiting up after a six-game absence due to the coronavirus. The Sixers looked like they were on their way to a memorable comeback win, scoring nine unanswered points late in the final quarter to turn a 100-107 deficit into a 109-107 lead with 1:44 remaining.

The Raptors had the last laugh, though, as they responded with their own 8-0 run to finish the game. Gary Trent Jr. and Fred VanVleet broke the Sixers’ hearts, knocking down back-to-back triples to seal the win for Toronto.

VanVleet top scored for the Raptors with 32 points, shooting 11 of 22 from the field, including 6 of 11 from beyond the arc. Trent and OG Anunoby contributed as well, scoring 20 points apiece. Chris Boucher provided valuable production off the bench, scoring 17 points and grabbing six rebounds.

With Embiid, Matisse Thybulle and Isaiah Joe still sidelined because of COVID-19, Tyrese Maxey took it upon himself to carry the scoring cudgels for the Sixers. He led all scorers with 33 points, knocking down 12 of his 19 field goal attempts. Maxey had a brilliant all-around performance, racking up five assists, four rebounds, one steal and two blocks against the Raptors.

The Indiana Pacers recorded a major upset on Thursday night, beating the Utah Jazz, 111-100, at Vivint Arena. Malcolm Brodgon starred for the Pacers in the road win, scoring a season-high 30 points and grabbing nine boards. T.J. McConnell dazzled off the bench, adding 21 points, eight rebounds and five assists for the Pacers.

Things got heated late in the fourth quarter with the referees ejecting Myles Turner, Rudy Gobert, Donovan Mitchell and Joe Ingles. The dismissals transpired after Turner and Gobert got into a shoving and wrestling match. It was a frustrating evening for the Jazz, who suffered their first home defeat of the season.

One team that’s heating up lately is the Los Angeles Clippers. They have now won six games in a row with their latest victory coming against the Miami Heat. The Clippers survived a furious late-game rally by the Heat to record a 112-109 win. Paul George led the way for the Clips with 27 points while Reggie Jackson added 22 markers, all of which came in the second half.

Will Shiba Inu Reach Another ATH in November? We Explore