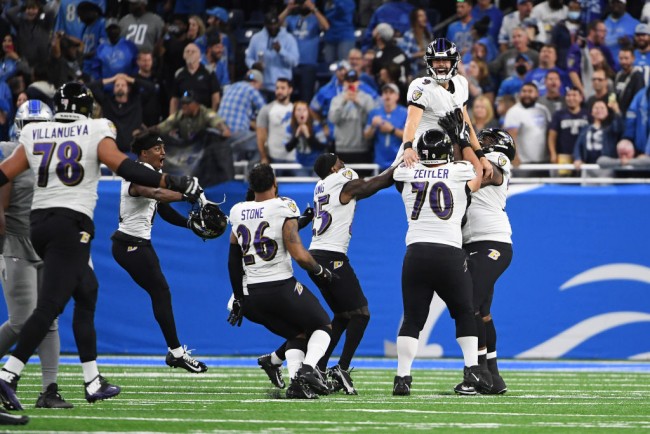 DETROIT, MICHIGAN – Justin Tucker (#9) of the Baltimore Ravens celebrates the winning field goal with his team in the game against the Detroit Lions at the Ford Field on September 26, 2021 in Detroit, Michigan. (Photo : Nic Antaya/Getty Images)

Denver’s hot streak continued on Sunday with a monster 26-point win over the New York Jets. The Broncos will look to make it four wins in a row when they host the Baltimore Ravens, who are coming off a nerve-wracking win over the Detroit Lions. Check our preview to see who has the edge in this Ravens vs Broncos showdown.

The Baltimore Ravens survived a major scare on Sunday as they came from behind to beat the Detroit Lions, 19-17, in a thrilling Week 3 encounter. Justin Tucker broke Detroit fans’ hearts, kicking a record 66-yard field goal as time expired to hand the Ravens the dramatic win.

Tucker’s mammoth attempt is now the longest field goal in NFL history, breaking the previous record set by Matt Prater in 2013 when he converted a 64-yard field goal. Tucker demonstrated once again his clutch gene, as he improved to 16-for-16 in his NFL career on field goal attempts in the final minute of regulation.

Justin Tucker was literally BEHIND the logo on this kick pic.twitter.com/ZByTE9thuO

It was a huge result for the Ravens, who managed to win despite losing four of their defensive players to COVID-19 protocol just two days before the Lions game. To extend their winning streak to three games against the Broncos, they will need to get some outstanding play from Lamar Jackson.

This season, Jackson has made it a point to push the ball downfield, leading the NFL in distance per target with 12.3 yards per passing attempt. He attempted 12 passes over 20 yards in the win against Detroit, and he currently leads the NFL in yards per completion with 14.4. He will need to be at his best against a Broncos defense that’s allowing just 221.7 total yards per game this season, second-best in the NFL.

There’s just no stopping Denver right now. The Broncos piled more misery on the hapless New York Jets, shutting them down entirely in a 26-0 rout on Sunday. It was a comprehensive win by the Broncos, who recorded their first 3-0 start in five years.

Powering Denver’s ascent to the top of the AFC West standings has been its phenomenal defense. The Broncos are tops in the NFL in scoring defense, allowing just 8.7 points per game this season. They made Zach Wilson’s life a living hell in Week 3, sacking the rookie quarterback five times and intercepting him twice.

Von Miller has been a beast for Denver, picking up his fourth sack in the win over the Jets. Middle linebacker Alexander Johnson was a defensive stalwart as well in the game against New York, recording two sacks, two tackles for loss, a pair of quarterback hits, and a pass breakup for the Broncos.

However, the Broncos will have their work cut out for them in Week 4, as they will next face Lamar Jackson and the rest of the Baltimore Ravens. Denver will be without one of its main offensive weapons in that game, with wide receiver KJ Hamler ruled out for the remainder of the season after suffering a knee injury against the Jets.

Baltimore wins on the road to hand Denver its first loss of the season.