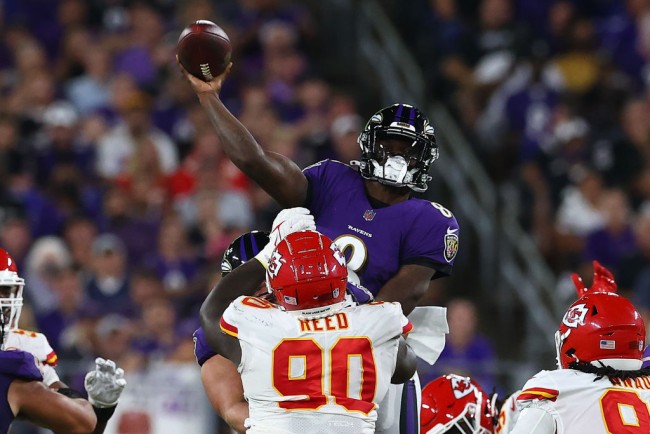 BALTIMORE, MARYLAND – Lamar Jackson (#8) of the Baltimore Ravens throws a touchdown pass to Marquise Brown (#5) during the third quarter against the Kansas City Chiefs at the M&T Bank Stadium on September 19, 2021 in Baltimore, Maryland. (Photo : Todd Olszewski/Getty Images)

The Baltimore Ravens have won their last three meetings with the Detroit Lions. They will look to stretch that unbeaten run to four games when they visit Detroit to face the Lions in Week 3. Who will emerge victorious in the Ravens vs. Lions clash?

The key to the Ravens’ victory against Kansas City was their excellent run game. They tallied 251 ground yards against the Chiefs as the Ravens improved to 29-3 when rushing for at least 200 yards during the John Harbaugh era. They will look to attack a Lions defensive line that has allowed 227 yards on the ground and three rushing touchdowns through the first two games.

Expected to lead the Ravens’ run attack this coming Sunday is Lamar Jackson. He was superb against Kansas City, running for 107 yards and scoring a pair of rushing touchdowns in the fourth quarter that swung the game in Baltimore’s favor.

Detroit may have suffered a 35-17 loss to the Green Bay Packers last Monday, but there were still plenty of positives for the Lions to take heading into their showdown with Baltimore this coming Sunday. The Lions gave the Packers fits the entire first half, even taking a 17-14 lead by half-time.

An absolute DIME from Jared Goff for the TD 🤩

For the Lions to record their first win of the season against the Ravens, they will need Jared Goff to continue his outstanding play. Goff has adapted to his new team quickly, throwing for 584 yards with five touchdowns and two interceptions through Detroit’s first two games.

He will fancy his chances against a Ravens defense that is second-worst in the NFL in total yards allowed (448 yards per game) and fourth-worst in terms of points surrendered (34 points per game). Goff is expected to link up with his favorite target T.J. Hockenson in this matchup. Hockenson was a beast against Green Bay, catching eight passes for 66 yards and a score.