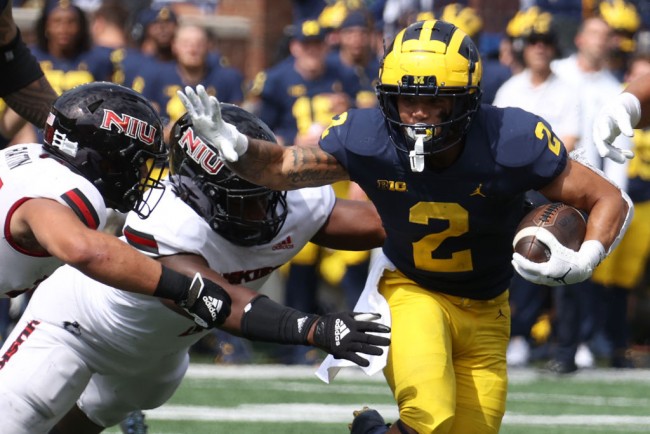 ANN ARBOR, MICHIGAN – Blake Corum #2 of the Michigan Wolverines tries to get around the tackle of Nick Rattin (#38) and James Ester (#1) of the Northern Illinois Huskies during a first half run at the Michigan Stadium on September 18, 2021 in Ann Arbor, Michigan. (Photo : Gregory Shamus/Getty Images)

The Wolverines’ 2021 NCAA campaign is off to an incredible start after they crushed Northern Illinois by 53 points in Week 3. Michigan is looking to keep the momentum going this coming Saturday when it takes on fellow unbeaten side Rutgers. Who will prevail in this battle of undefeated teams? Read our preview to see who has the edge in this Rutgers vs. Michigan clash.

Rutgers preserved its unbeaten record on Saturday with a comprehensive 45-13 win over Delaware. Noah Vedral threw for 323 yards and two passing touchdowns while Isaih Pacheco ran for two more scores for the Scarlet Knights, who started the season 3-0 for the first time since 2012.

Things are bound to get more challenging for Rutgers in Week 4, with mighty Michigan standing in its way this weekend. The Scarlet Knights had not beaten a ranked team since 2009 when they defeated No. 23 South Florida.

For Rutgers to record the upset against Michigan, the Scarlet Knights will need Vedral to continue his outstanding play. He has completed 58 of 81 passes for 606 yards and four touchdowns through Rutgers’ opening three games. Vedral’s 71.6% completion percentage is 14th-highest in the nation and third in the Big Ten. That is also the highest completion percentage by a Scarlet Knight quarterback since 2000.

Momentum is with the Michigan Wolverines heading into Saturday’s showdown with Rutgers after destroying the Northern Illinois Huskies, 63-10, in Week 3. It was another impressive victory for the Wolverines, who improved their season record to 3-0. They have won their first three outings by an average of 35.7 points.

The key to Michigan’s sizzling start has been its excellent offense. The Wolverines are averaging 47 points per game this season, third-best in the entire FBS. Just like in their victories against Washington and Western Michigan, Blake Corum starred for the Wolverines against the Huskies. He wreaked havoc on the ground against Northern Illinois, rushing for 125 yards with three touchdowns on 13 carries.

For the Wolverines to preserve their unbeaten record against Rutgers, they will need to establish their ground attack this coming Saturday. Michigan ran for 373 yards in the win against Northern Illinois. Corum has been a beast for the Wolverines on the ground this season, rushing for 135.7 yards per game, the third-best in the country. He already has eight touchdowns this year.

Everything You Need to Know to Become a Data Engineer!