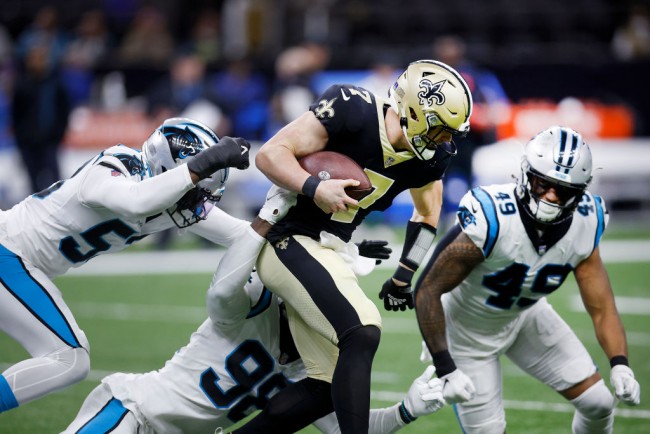 NEW ORLEANS, LOUISIANA – Taysom Hill #7 of the New Orleans Saints is tackled by Carolina Panthers defensemen in the second quarter of the game at Caesars Superdome on January 02, 2022 in New Orleans, Louisiana. (Photo : Chris Graythen/Getty Images)

A critical showdown will be heading our way in Week 18 as the Atlanta Falcons host the New Orleans Saints at Mercedes-Benz Stadium. Who will prevail in this NFC South clash? Here’s a breakdown of the Saints vs Falcons matchup.

New Orleans’ playoff hopes remained very much alive after the Saints recorded an impressive 18-10 win over the Carolina Panthers in their NFC South showdown in Week 17. The Saints are in eighth place in the NFC standings with an 8-8 record. They trail the San Francisco 49ers and the Philadelphia Eagles, who hold the last two wild card spots in the NFC, by just one game heading into Week 18.

For the Saints to clinch a playoff berth for the fifth consecutive year, they will need to beat the Atlanta Falcons in Week 18 and hope that the Los Angeles Rams beat the San Francisco 49ers in their regular-season finale.

For the Steelers to grab the all-important win against the Falcons, Taysom Hill will need to deliver the goods in Week 18. He completed 17 of 28 passes for 222 yards with one touchdown and no interceptions in the win against the Panthers. Hill also led the team in rushing last week with 45 yards.

Hill is 6-2 in eight career quarterback starts, running for at least 30 yards in each of those outings. He passed for 232 yards and two touchdowns and had 83 yards rushing when he played at Atlanta on December 6, 2020.

Atlanta’s dreams of reaching the 2021 playoffs ended in Week 17 after the Falcons lost to the Buffalo Bills, 29-15. The Falcons entered the halftime break with a 15-14 lead over the Bills, but a poor second half performance sank their postseason bid.

They struggled without Kyle Pitts, who was limited to just two snaps in the second half after injuring his hamstring. History beckons for Pitts if he manages to play in the regular season finale as he is just 49 yards shy of tying Mike Ditka’s record for most receiving yards by an NFL rookie tight end. Pitts currently has 1,018 yards receiving.

For the Falcons to nab their first season sweep against the Saints since 2016, they will need Matt Ryan to produce a solid performance. He needs just 248 passing yards against the Saints to record his 11th career 4,000-yard season. Ryan struggled in the loss to the Bills, completing just 13 of 23 passes for 197 yards with no touchdowns and no picks.

One guy who wants to put on a show for the home finale is running back Cordarrelle Patterson. He has been a vital cog for the Falcons this campaign, setting career highs with 1,154 scrimmage yards, 607 yards rushing, 547 yards receiving, six rushing touchdowns, and five receiving touchdowns.