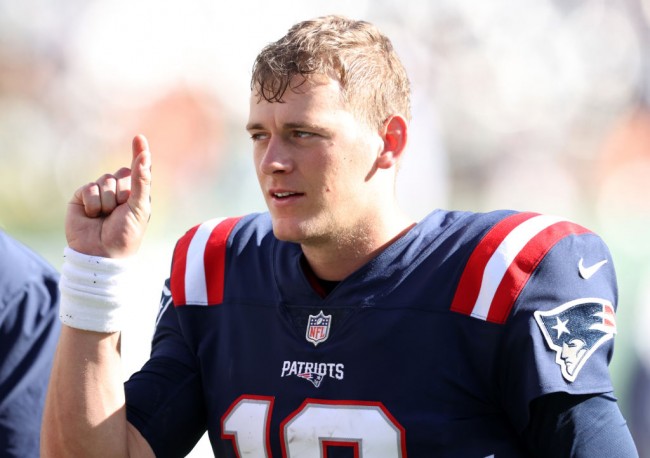 EAST RUTHERFORD, NEW JERSEY – Quarterback Mac Jones of the New England Patriots reacts while walking off the field after the game against the New York Jets at the MetLife Stadium on September 19, 2021 in East Rutherford, New Jersey. (Photo : Elsa/Getty Images)

On Sunday, New England finally got its first win in the Mac Jones era, with the Patriots crushing the Jets by 19 points. The Patriots now set their sights on a 2-1 slate when they face New Orleans at Foxborough in Week 3. Can Mac Jones finally notch his first NFL home win in that Saints vs. Patriots game? Check our preview to see who has the edge in that showdown.

The Carolina Panthers sent the New Orleans Saints crashing back to earth after inflecting a deflating 26-7 win on Sunday. It was a disappointing defeat for the Saints, who never led in the contest.

For the Saints to return to winning ways against the Patriots, they will need to do a much better job on the offensive end. The Saints recorded just 128 total yards in the loss to the Panthers, the lowest offensive output in terms of yardage in the Sean Payton era.

The onus then is on quarterback Jameis Winston to improve on his passing accuracy. He completed just 11 of 22 passes for 111 yards in the loss to Carolina. Winston failed to record a single passing touchdown in the defeat, a major letdown considering he threw for five the previous week against Green Bay.

Jameis Winston is BACK pic.twitter.com/vzYcMTfIcC

It’s important for New Orleans as well to limit its mistakes against New England. Winston threw two interceptions while the Saints committed 11 penalties for a loss of 115 yards in the defeat to Carolina. They will need to be at their best against the Pats, who intercepted Zach Wilson four times in their Week 2 win against the Jets.

On Sunday, Mac Jones emerged victorious in the much-hyped battle of the rookie quarterbacks as he led the New England Patriots to a comprehensive 25-6 win over Zach Wilson and the New York Jets at the MetLife Stadium.

Jones completed 22 of 30 passes for 186 yards against the Jets, a week after he went 29 for 39 for 281 yards and a touchdown in a stinging defeat to Miami. Damien Harris and James White provided support via their ground attacks, each scoring a touchdown run for the Patriots, who have now won 11 straight games against the Jets.

It was Belichick’s defensive game plan against Wilson; however, that sealed the win for the Patriots as they destroyed the No. 2 pick in this year’s NFL Draft. Wilson failed to solve the New England puzzle the entire game, completing just 19 of 33 passes for 210 yards with no touchdowns and four picks.

With the win, Belichick improved to 22-6 against rookie quarterbacks since taking over as coach of the Patriots in 2000. Belichick will look to make it two wins in a row for the Patriots when they host the Saints this coming Sunday. New England needs to limit the production of Alvin Kamara in that Week 3 matchup.

Kamara struggled mightily in Week 2, rushing for just five yards on eight carries, a major reason why New Orleans lost badly to Carolina. Stopping the Saints’ ground game will be critical for the Patriots to record their first home win in the Mac Jones era.

Patriots win and cover the spread.

Chelsea, Spurs to miss out on Franck Kessie?

Dogecoin 2.0 – The New Era of the Dogecoin that’s Now Popular