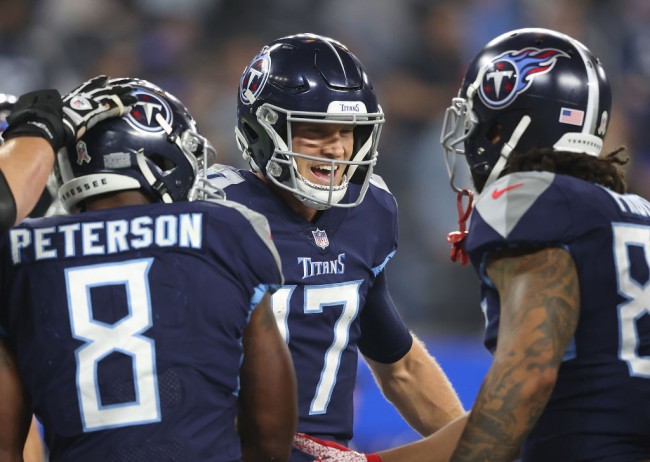 INGLEWOOD, CALIFORNIA – Ryan Tannehill (#17) of the Tennessee Titans reacts after a rushing touchdown by Adrian Peterson (#8) against the Los Angeles Rams during the fourth quarter at SoFi Stadium on November 07, 2021 in Inglewood, California. (Photo : Ronald Martinez/Getty Images)

The Tennessee Titans extended their winning streak to five games with a resounding 12-point win over the Los Angeles Rams on the road. They will look to make it six wins in a row when they host the Saints in Week 10. Who will prevail in this Saints vs Titans clash? Here’s a breakdown of that matchup.

The New Orleans Saints came crashing back to earth in Week 9, losing 27-25 to the Atlanta Falcons in heart-breaking fashion. It was a demoralizing defeat for the Saints, who were coming off a 36-27 win over reigning Super Bowl champions Tampa Bay Buccaneers in Week 8.

The Saints looked like they were on their way to a memorable come-from-behind win after scoring 19 unanswered points in the fourth quarter against the Falcons, turning a 24-6 deficit into a 25-24 lead with just over one minute remaining in the game.

However, that was more than enough time for Matt Ryan to work his magic and deal a gut punch to the Saints. Ryan uncorked a 64-yard pass to Cordarelle Patterson on the following possession, immediately putting Atlanta on field goal range. As time expired, the Falcons took full advantage of that huge gain, with Younghoe Koo scoring a game-winning 29-yard field goal.

There is some concerning news for the Saints ahead of their meeting with the Titans. Alvin Kamara did not practice on Wednesday because of a knee injury. Kamara went to the medical tent during their loss to the Falcons, but he still played 68 percent of the Saints’ offensive snaps in that game.

There is just no stopping Tennessee right now. The Titans stunned the Los Angeles Rams at SoFi Stadium, pulling off a 28-16 victory in Week 9 even without injured star Derrick Henry. The Titans’ defense starred in this Sunday Night Football win, making a couple of crucial interceptions in the second quarter that swung the momentum in Tennessee’s favor.

The Titans recorded back-to-back picks on Matthew Stafford at the start of the second period, turning a 0-3 deficit into a 14-3 advantage in a hurry. The first pick transpired when Jeffery Simmons pressured Stafford in the end zone. To avoid the safety, the Rams quarterback threw a desperate pass that David Long Jr corraled.

The Titans scored immediately after that pick, with Geoff Swaim catching a touchdown pass on the next snap. The Titans compounded Stafford’s woes right after kick-off, with Kevin Byard intercepting his pass intended for Robert Woods and returning it for a pick-six. Ryan Tannehill made it 21-3 later in the first half with a rushing touchdown on fourth down.

The Titans outscored the Rams, 21-0, in the second quarter. They managed to hold on to the win despite a subpar performance by Tannehill, who recorded just 143 passing yards.

Tennessee wins and covers the spread.

10 Cryptocurrencies Expected to Explode in 2022

How Is Cryptocurrency Revolutionizing The Fashion Industry