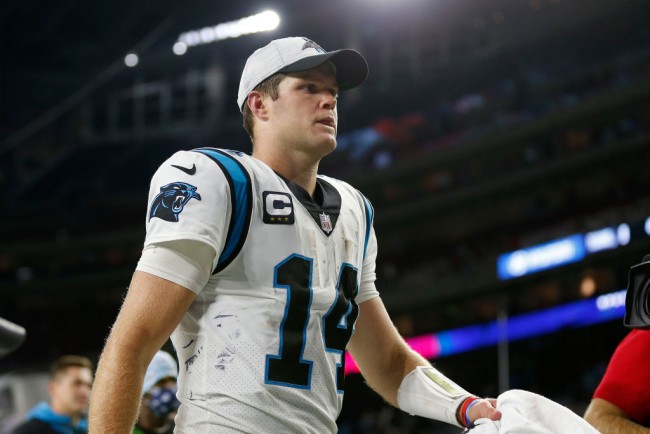 HOUSTON, TEXAS – Sam Darnold of the Carolina Panthers leaves the field after a 24-9 win over the Houston Texans at the NRG Stadium on September 23, 2021 in Houston, Texas. (Photo : Tim Warner/Getty Images)

The Carolina Panthers continued their hot start to the season on Thursday night, beating the Houston Texans, 24-9, to improve their overall record to 3-0. Sam Darnold starred for the Panthers, who are unbeaten in their first three games of an NFL campaign for the first time since 2015, the season in which they made an appearance in Super Bowl 50.

Another TD from Sam Darnold!!!

Darnold has proven to be a shrewd signing for the Panthers, and he delivered yet again for Carolina in Week 3. He completed 23 of 34 passes for 304 yards and scored two rushing touchdowns that ended up being the difference in this contest. Darnold now has thrown for at least 300 yards in each of his last two outings, continuing his career resurgence after leaving the New York Jets.

Carolina’s victory wouldn’t be possible, though, without the heroics of its stellar defense. They put the clamps on Texans rookie quarterback Davis Mills, holding him to just 168 yards passing in his first career start. Carolina’s defensive line made Mills’ life miserable the entire evening, sacking him four times.

The Panthers also limited the Texans’ running game, holding Houston to just 42 yards on the ground. With their ground game in disarray, the Texans weren’t able to keep the chains moving as they punted the ball six times. The Panthers’ defense has been tremendous to start the season, allowing just 573 yards and recording 14 sacks through their first three games.

The Panthers’ victory came at a huge price, though, as they lost two of their key players to injuries. Christian McCaffrey injured his hamstring during a two-yard run early in the second quarter, with Carolina leading 7-0.

Christian McCaffrey has been ruled OUT for the rest of #TNF with a hamstring injury, per FOX #KeepPounding pic.twitter.com/ScfHUjMUSO

He immediately left the field and didn’t return, finishing the game with just 40 yards on nine touches. McCaffrey has been a vital cog for Carolina to start the season, leading the NFL with 324 scrimmage yards through the first two weeks of the 2021 campaign.

The Panthers then suffered more blows in the second half with prized rookie cornerback Jaycee Horn and safety Juston Burris going down with injuries on consecutive plays on the first possession of the third quarter.

Horn was carted off the field after breaking bones in his right foot while backpedaling on a pass play. Horn, selected eighth overall by the Panthers in this year’s NFL Draft, had recorded two tackles for Carolina before his injury. Burris had two solo tackles on Thursday before exiting the Texans game with a groin injury.

The injuries to McCaffrey, Horn, and Burris will be a major concern for the Panthers ahead of their Week 4 clash with the Dallas Cowboys at the AT&T Stadium.

West Ham and Crystal Palace could move for Arsenal star