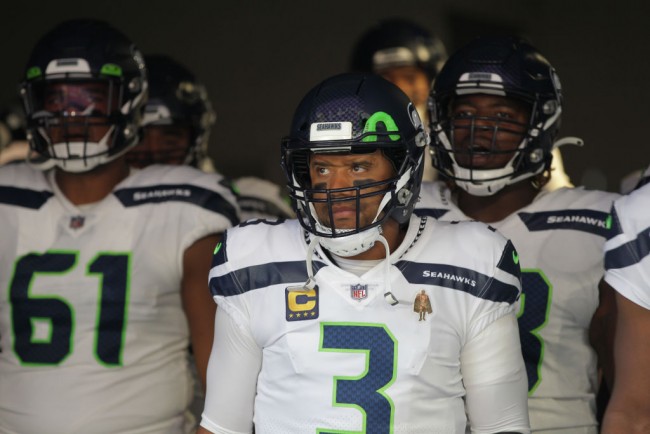 MINNEAPOLIS, MINNESOTA – Russell Wilson (#3) of the Seattle Seahawks waits in the tunnel before the game against the Minnesota Vikings at the U.S. Bank Stadium on September 26, 2021 in Minneapolis, Minnesota. (Photo : David Berding/Getty Images)

A blockbuster showdown will be heading our way this coming Sunday as the Seattle Seahawks and the San Francisco 49ers square off in a critical Week 4 clash. Both NFC West teams are coming off gut-wrenching losses, so victory is paramount in this divisional matchup. Here’s an in-depth preview of this Seahawks vs 49ers showdown.

Things are going from bad to worse for the Seattle Seahawks as they stumbled to their second consecutive defeat on Sunday with a 30-17 loss to the Minnesota Vikings. It was a disappointing loss for the Seahawks, who lost to the Vikings for the first time since 2009.

“HE’S JJ!!!!” @PAonTheMic had the call of the Justin Jefferson TD to give the Vikings the lead over the Seahawks late in the first half! #KFANVikes pic.twitter.com/54Y8D5ua9L

They will look to get their season back on track when they lock horns with the San Francisco 49ers this coming Sunday. This is a major test for Russell Wilson, who has never lost three in a row in his professional football career. It has been a decade since Seattle last lost three consecutive games, with the Seahawks missing the playoffs that season.

It’s critical for the Seahawks that they finish the game strong against the 49ers. Seattle is the lowest-scoring NFL team in the second half this season, scoring a total of just 13 points during that period in their first three games.

The Seahawks were shut out in the third and fourth quarters of the game against the Vikings, helping Minnesota cruise to an easy win. The Seahawks have started games strongly, though, scoring 62 first-half points in Weeks 1 to 3, the highest in the NFL.

The San Francisco 49ers are no longer undefeated. On Sunday, the 49ers picked up their first defeat of the season in heartbreaking fashion, losing 30-28 to the Green Bay Packers via a last-gasp field goal attempt by Mason Crosby.

The Niners had an excellent chance to record their third straight victory, but several missed opportunities on the defensive end denied them a 3-0 slate. The 49ers had no answer for Aaron Rodgers, who passed for 261 yards and two touchdowns.

They allowed Rodgers to engineer a scoring drive in the final 37 seconds despite Green Bay having no timeouts left and the Packers starting at their own 25. Instead of forging a three-way tie with the Los Angeles Rams and the Arizona Cardinals at the top of the NFC West standings, San Francisco fell one game back of the leaders in the strongest division in the NFL.

Kyle Juszczyk gives the #49ers the lead with 0:37 seconds to play! #NFL
pic.twitter.com/hR3yGfVv4W

One guy who needs to step up for the 49ers in Week 4 is Jimmy Garoppolo. He completed 25 of 40 passes for 257 yards, with two touchdowns and one interception in the loss to the Packers. Garoppolo gave the 49ers the lead in the dying seconds against the Packers, throwing a 12-yard touchdown pass to fullback Kyle Juszczyk.

He will fancy his chances against a Seahawks pass defense that after Sunday is ranked 26th in the NFL in passer rating allowed (108.4) and 26th in completion rate allowed (70.7 percent). Seattle is one of just four teams in the league that has still not recorded an interception this season.

Top Characteristics of Explainable AI for Organizations to Leverage