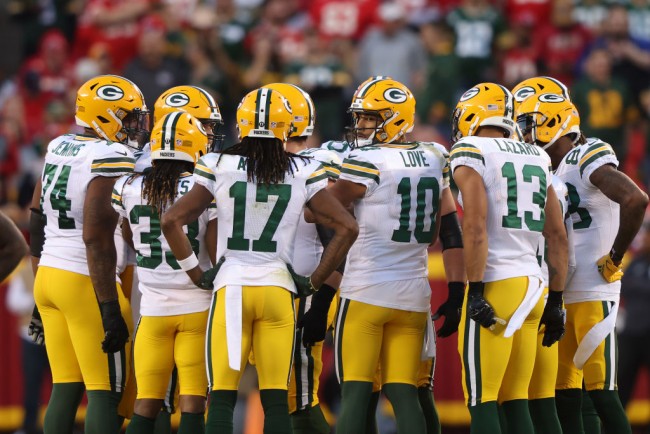 KANSAS CITY, MISSOURI – NOVEMBER 07: Jordan Love #10 of the Green Bay Packers looks back to the sides lines from the huddle during the second quarter in the game against the Kansas City Chiefs at Arrowhead Stadium on November 07, 2021 in Kansas City, Missouri. (Photo : Jamie Squire/Getty Images)

Two NFC teams will square off on Sunday in Week 10 as the Green Bay Packers host the Seattle Seahawks at Lambeau Field. The Packers have won four of their last five meetings against the Seahawks but the main reason behind that recent dominance is a major doubt for this contest with Aaron Rodgers still in quarantine because of COVID-19. Who will prevail in this Seahawks vs Packers clash? Here’s a breakdown of this matchup.

The Seattle Seahawks headed into their bye week feeling good about themselves after pulling off a resounding 31-7 victory over the Jacksonville Jaguars. The win helped the Seahawks snap their three-game losing skid as they enter Week 10 with a 3-5 record.

Geno Smith starred for the Seahawks in the Week 8 win, completing 20 of 24 passes for 195 yards with two touchdowns and no interceptions. He also did some damage on the ground, rushing for eight yards and another score on two carries. Smith completed his first 14 passes against the Jaguars, the longest streak to start a game in the league this year.

D.K. Metcalf was the main beneficiary of Smith’s highly efficient play, catching both of the latter’s touchdown passes. Tyler Lockett also wreaked havoc through the air, finishing with 12 catches for 142 yards. That is the fourth time in Lockett’s NFL career that he recorded at least 12 receptions.

Jordan Love’s first career NFL start did not go according to plan as the Green Bay Packers suffered a 13-7 loss to the Kansas City Chiefs in Week 9. Love got the starting nod after the unvaccinated Aaron Rodgers tested positive for COVID-19.

He completed 19 of 34 passes for 190 yards with one touchdown and one interception, both of which came in the final period as the Packers tried to overhaul a 13-point deficit. Love finally recorded his first touchdown pass in the NFL with 4:49 remaining in the contest, finding Allen Lazard in the end zone to cut Kansas City’s lead to 13-7.

That was the closest the Packers got in this game as the Chiefs were able to run out the clock to preserve the win. Green Bay is now 6-12-1 without Rodgers in its lineup since 2008. The good news for the Packers is that Rodgers could return for the game against the Seahawks, as long as he tests negative once his 10-day quarantine ends on Saturday.

If Rodgers still can’t go, though, the Packers defense needs to stand tall again in Week 9. They were superb in the loss to the Chiefs, holding Patrick Mahomes to a career low 166 passing yards (when playing a full game). That kept the Packers in the game despite the subpar performance by Love.

Bitcoin Reaches US$68,000 Mark! What is Triggering this Wave?