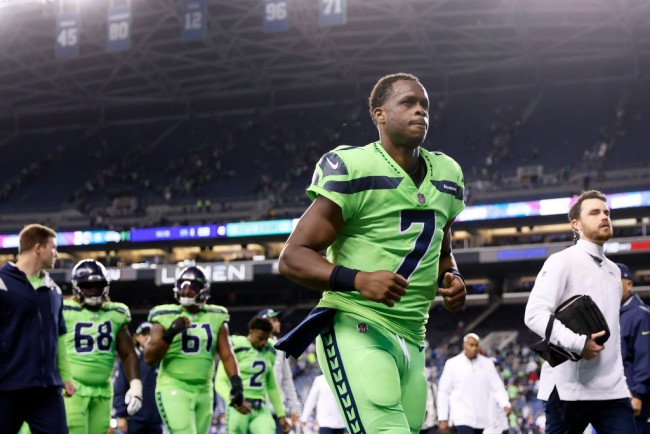 SEATTLE, WASHINGTON – Geno Smith (#7) of the Seattle Seahawks jogs off the field after losing to the Los Angeles Rams, 26-17, at the Lumen Field on October 07, 2021 in Seattle, Washington. (Photo : Steph Chambers/Getty Images)

The Seattle Seahawks will face their toughest test this season in Week 6 as they will square off with the Pittsburgh Steelers on the road on Sunday Night Football without Russell Wilson. Can Geno Smith rise to the occasion and deliver Seattle the upset win in this Seahawks vs Steelers showdown?

The Seattle Seahawks are in a whole lot of trouble heading into their showdown with the Steelers. They are losing ground fast in the NFC West, trailing division leaders Arizona by three games after Week 5. They will have to navigate the next few weeks without their leader and starting quarterback Russell Wilson to make matters worse for the Seahawks.

He suffered a fracture dislocation and ruptured a tendon in the middle finger of his throwing hand in Seattle’s 26-17 loss to the Los Angeles Rams on Thursday Night Football. Wilson decided to undergo surgery a day after Aaron Donald’s hit on his throwing hand, which will force him to miss at least Seattle’s next four games.

Not seeing Wilson under center in Week 6 will be an unfamiliar sight for Seahawks fans as he has not missed a game in his NFL career. He has started in 149 consecutive games for Seattle, a streak that will be snapped this coming Sunday against the Steelers.

Starting in Wilson’s place for the crunch clash against Pittsburgh is Geno Smith. He stepped up big time in Week 5, leading the Seahawks to a five-play, 98-yard touchdown drive after Wilson’s departure due to injury. Smith, who has been the Seahawks’ backup QB since 2019, led Seattle to two scoring drives against the Rams, including a 23-yard touchdown pass to DK Metcalf.

On Sunday, the Pittsburgh Steelers finally ended their three-game losing rut with a thrilling 27-19 victory over the Denver Broncos. Najee Harris starred for the Steelers in the Week 5 win, running for a career-best 122 yards and a score before a cramping issue forced him to leave the game during the fourth quarter.

The Steelers nearly squandered their 18-point advantage with Harris sidelined as Teddy Bridgewater led the Broncos to two touchdown drives late in the fourth to slice the deficit to just a single possession.

The Steelers’ defense stood tall, though, with James Pierre intercepting Bridgewater’s pass to the end zone with 11 seconds remaining to seal the win for Pittsburgh. It was a critical victory for the Steelers, who gained some ground in the AFC North after their division rivals suffered defeats in Week 5.

Pittsburgh’s victory came at a high price, though, as JuJu Smith-Schuster and Devin Bush suffered injuries against the Broncos. Smith-Schuster will be sidelined for at least the next four months after undergoing surgery to repair the shoulder injury he sustained during the second quarter of the win against Denver. Bush injured his groin again in Week 5 and is now a major doubt for the game against Seattle.

Pittsburgh wins and covers the spread.