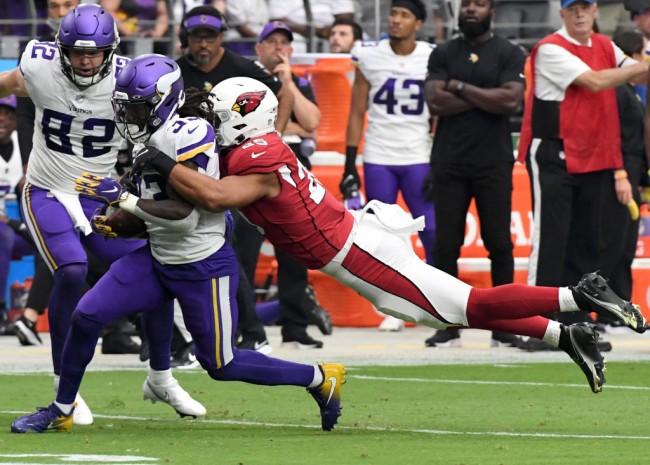 GLENDALE, ARIZONA – Zaven Collins (#25) of the Arizona Cardinals tackles Dalvin Cook #33 of the Minnesota Vikings after Cook made a reception in the first quarter of the game at the State Farm Stadium on September 19, 2021 in Glendale, Arizona. (Photo : Norm Hall/Getty Images)

Luck has not been with Minnesota’s side to start the season, with the Vikings losing their first two games by just a combined four points. The Vikings will look to kick start their campaign at home when they face the Seattle Seahawks in a critical Week 3 clash. Check out our preview to see who has the edge in this Seattle Seahawks vs Minnesota Vikings showdown.

The Seattle Seahawks suffered a stunning defeat in Week 2, squandering a 14-point lead in the final quarter to the Tennessee Titans en route to a heart-breaking 33-30 overtime loss. It was just the fourth time in franchise history that the Seahawks lost when leading by at least 15 points at the half-time break. The Seahawks also had their 12-game winning streak in home openers snapped after Sunday’s collapse.

The good news for the Seahawks is that they have fared well against the Vikings of late, with Minnesota’s last victory over Seattle coming way back in 2009. The Seahawks have won each of their previous seven meetings with the Vikings.

Their previous three matchups the past three seasons have come at Lumen Field, with the Seahawks outscoring them 85-63 during that stretch. Their most recent matchup resulted in a one-point win for Seattle, with DK Metcalf scoring a last-second touchdown.

The Vikings will head back home to Minnesota with a disappointing 0-2 record after suffering yet another narrow loss in Week 2. The Vikings wasted a huge opportunity to grab their first win of the season against Arizona as kicker Greg Joseph missed a game-winning 37-yard field goal attempt on the final play of regulation, handing the Cardinals the 34-33 win.

They will look to get their season back on track with a win over Seattle in Week 3. For the Vikings to accomplish that feat, they will need Dalvin Cook to continue his stellar play on the ground.

He has been tremendous for Minnesota to start the season, producing excellent numbers with the increased workload. He managed 148 yards on 26 touches against the Cards, 131 of which came via the run game.

The main concern for the Vikings right now is that Cook picked up a couple of minor injuries during that contest. He suffered a stinger on the first play after the first half’s two-minute warning, with the Vikings running back staying down for a bit after the hit. He then got banged up again in the fourth quarter with Cook suffering an ankle sprain.

Cook did not participate in Wednesday’s practice, so his status for the Week 3 game remains uncertain at this stage. With Cook injured, the Vikings may need to give backup running backs Alexander Mattison and Ameer Abdullah more touches against the Seahawks. They have played just a combined 32 snaps this season, with Mattison and Abdullah recording only seven touches.

Minnesota enters the win column with a 34-27 victory over Seattle.