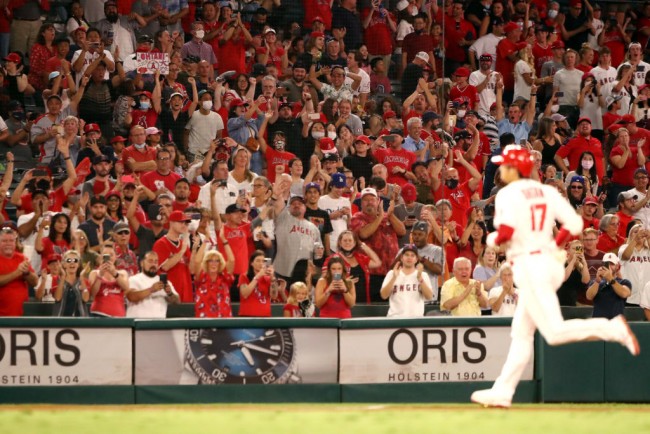 ANAHEIM, CALIFORNIA – Fans cheer while Shohei Ohtani of the Los Angeles Angels runs around the bases after hitting a three run home run during the sixth inning against the Texas Rangers at the Angel Stadium of Anaheim on September 04, 2021 in Anaheim, California. (Photo : Katelyn Mulcahy/Getty Images)

The 2021 MLB season is entering its home stretch, and the race to become the league’s home run king is heating up. Shohei Ohtani continues to lead in this department with just a month remaining in the regular season, but the chasing pack is gaining ground fast with Salvador Perez and Vladimir Guerrero Jr. hot on the Japanese star’s heels.

Ohtani currently leads the majors with 43 home runs, with his last dinger coming in the Los Angeles Angels’ 4-1 win over the Texas Rangers on Saturday. That three-run homer came a day after he threw a career-high 117 pitches in the Angels’ 3-2 win over the Rangers.

He’s got 43 home runs on the season 💪 #WeBelieve

Ohtani is closing in on Troy Glaus’ club record of 47 homers that he set in 2000. Ohtani is also attempting to become the first Angels player to lead the majors outright in home runs in a season. Former Angels star Reggie Jackson tied for first in that department back in 1982 with 39 home runs.

Ohtani’s lead at the top of the home run standings is dwindling fast, though, thanks to the red-hot bat of Salvador Perez. The Kansas City Royals catcher has been in fine form of late, crushing a whopping 15 homers since the beginning of August and recording eight home runs in his last 12 games.

Perez’s sizzling run has seen him leapfrog Vladimir Guerrero Jr. in the home run race, with the Venezuelan catcher now possessing a total of 41 dingers this season. His latest home run came in Sunday’s 6-0 win over the Chicago White Sox, with Perez delivering a three-run blast in the first inning.

Perez is just the sixth primary catcher in the history of MLB to record 40 or more homers in a season. He joins in that exclusive list Cincinnati Reds’ Johnny Bench; Atlanta Braves’ Javy Lopez and Roy Campanella; and New York Mets’ Todd Hundley and Mike Piazza.

We can never rule out Vladimir Guerrero Jr. from making a late push for the home run title. He pulled to within three homers off Ohtani’s mark after blasting his 40th dinger Monday in the Blue Jays’ 8-0 demolition of the New York Yankees.

He posted two new records with that blast as he became the youngest Toronto hitter to reach the 40-homer mark in a season. He also made history with his father, Vladimir Sr., as they became just the second father-son duo in the majors to record 40 homers each in a single season.

Top 10 Machine Learning Innovations to Watch Out for in 2021