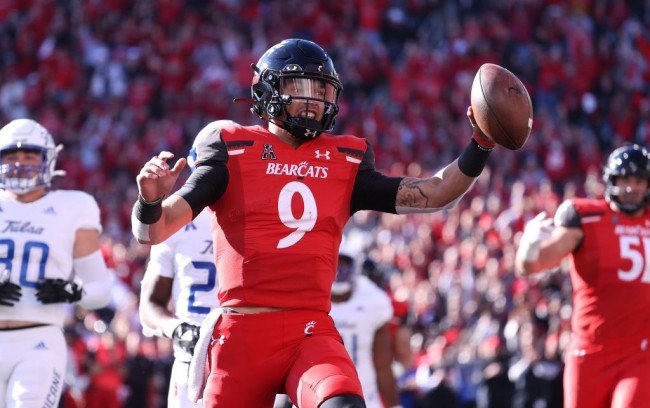 The Cincinnati Bearcats dropped to No. 3 in the AP Top 25 poll after a less than impressive win over USF in Week 11. They will look to record a much better performance this Saturday when they host the SMU Mustangs. Here’s our preview to see who has the edge in this SMU vs Cincinnati Week 12 game.

The SMU Mustangs finally snapped their two-game losing skid with a convincing 55-28 win over the UCF Knights. It was a critical win for the Mustangs, who improved to 8-2 for the season and 4-2 in conference play.

Tanner Mordecai starred for the Mustangs, completing 37 of 54 passes for 377 yards with three touchdowns and one interception. Mordecai made sure he distributed the rock, with four players each recording at least 70 receiving yards. Rashee Rice, Grant Calcaterra, and Reggie Roberson Jr. each scored a touchdown for SMU in the rout.

Things are bound to get more challenging for them in Week 12, as they will face a Cincinnati team that is fifth in the FBS in passing defense, allowing just 164.4 yards per game through the air this season.

It is important for the Mustangs that they also establish their run game against the Bearcats. They punished UCF’s defensive line in Week 11, recording 241 yards rushing in the one-sided win. Ulysses Bentley IV ran for 97 yards and a score on 14 carries while Tre Siggers racked up 93 rushing yards and three touchdowns.

Momentum is with Cincinnati heading into Saturday’s showdown against SMU after the Bearcats defeated the South Florida Bulls, 45-28, in Week 11. It was an important victory for the Bearcats, who improved their season record to 10-0.

They had won their first 10 outings by an average of 23 points. The Bearcats start the season with 10 straight wins for just the second time in school history. The last time that happened was back in 2009, when Cincinnati started 12-0.

Providing the impetus for Cincinnati’s hot start is its outstanding defense. The Bearcats are sixth in the nation in scoring defense, allowing just 16.2 points per game this campaign. The victory did not come easy, though, for Cincinnati in Week 11 with South Florida managing to score four touchdowns against the Bearcats’ defense.

Fortunately for Cincinnati, Desmond Ridder was immense on the offensive end. He completed 31 of 39 passes for 304 yards with two touchdowns and one interception in the win against USF. Ridder also did some damage on the ground, running for 65 yards on 13 carries. Ridder made history during the third quarter when he threw his 79th touchdown pass, breaking the school record for touchdowns.

The Bearcats needed Ridder to be exceptional with running back Jerome Ford sidelined with a leg injury. Ford was Cincinnati’s main weapon on the ground, rushing for 888 yards and 15 touchdowns this season.