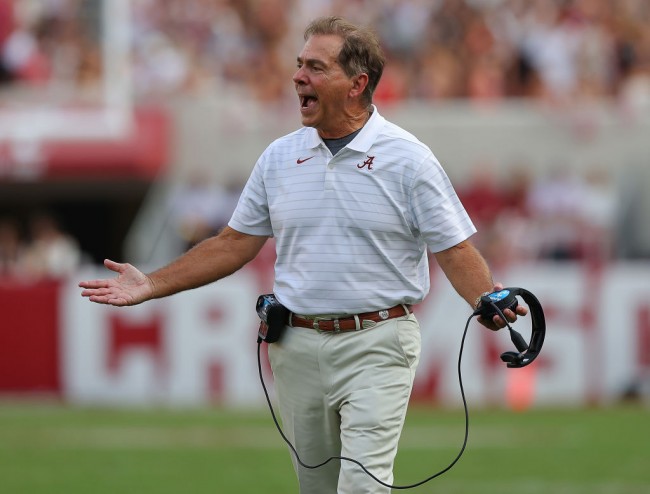 TUSCALOOSA, ALABAMA – Head coach Nick Saban of the Alabama Crimson Tide reacts to his defense after giving up a touchdown to the Mercer Bears during the second half at the Bryant-Denny Stadium on September 11, 2021 in Tuscaloosa, Alabama. (Photo : Kevin C. Cox/Getty Images)

There is just no stopping Alabama right now. On Saturday, the Crimson Tide extended their winning streak to 17 games with a thrilling two-point win over Florida. Nick Saban’s men will look to keep the momentum going when they square off with the Southern Miss Golden Eagles this coming Saturday. Read on below for an in-depth breakdown of this Southern Miss vs Alabama clash.

The Southern Miss Golden Eagles were sent crashing to earth with a disappointing 21-9 loss to the Troy Trojans on Saturday. The Golden Eagles had an excellent opportunity to record their second straight victory, but several missed chances on the offensive end denied them a 2-1 overall slate. Troy turned the game around in the second half, outscoring Southern Miss 21-6 during this stretch.

It won’t get any easier for the Golden Eagles in Week 4 as they will face the vaunted Crimson Tide next. For Southern Miss to record a major shock and cover the huge 45.5-point spread against Alabama, it needs to get a huge performance from Frank Gore Jr.

He ran for just 31 yards on 15 carries in the loss to Troy after averaging 121.5 yards per game on the ground in Southern Miss’ first two outings. The Golden Eagles’ run game was abysmal on Saturday, posting minus-1 yards rushing against the Trojans. Ty Keyes was responsible for that low mark as the Southern Miss quarterback was sacked nine times for a loss of 70 yards.

The Alabama Crimson Tide will head to their showdown with the Southern Miss Golden Eagles with momentum on their side after beating the Florida Gators, 31-29, on Saturday. It was another impressive victory for the Crimson Tide, who improved their record this season to 3-0. They have won their first three games by an average of 22.3 points.

The key to Alabama’s hot start has been its superb offense. The Crimson Tide is averaging 41 points per game this season, 22nd in the entire FBS. Just like in their victories against Miami and Mercer, Bryce Young grabbed the headlines for the Crimson Tide against the Gators. He completed 22 of 35 passes for 233 yards with three touchdowns.

For the Crimson Tide to preserve their unbeaten record against the Golden Eagles, they will need to do a much better job of stopping the run. Florida wreaked havoc against Alabama’s defensive line on Saturday, racking up 258 rushing yards and converting five third downs via the run game. It was just the fifth time under Nick Saban’s reign that an Alabama defense allowed three rushing touchdowns in a game.

Alabama wins and covers the spread.

Top IoT Trends and Predictions To Look Out For in 2022