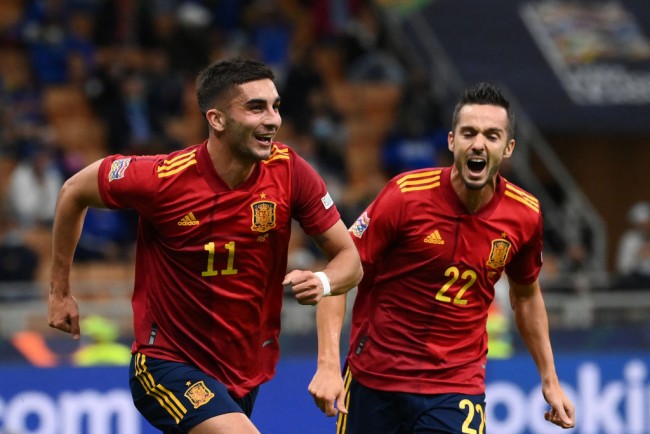 Spain’s forward Ferran Torres (L) celebrates with teammates after scoring a goal during the UEFA Nations League semifinal football match between Italy and Spain at the San Siro (Giuseppe-Meazza) stadium in Milan, on October 6, 2021. (Photo : FRANCK FIFE/AFP via Getty Images)

Spain advanced to the final of the UEFA Nations League on Wednesday with a thrilling 2-1 win over Italy at the San Siro. Ferran Torres scored twice for La Roja to end the Azzurri’s world-record 37-match unbeaten run.

Although this is just UEFA’s secondary tournament, the Spaniards will still take comfort in the fact that they have gotten a measure of revenge for their painful penalty shootout loss to Italy in the Euro 2020 semifinal at the Wembley Stadium.

Torres opened the scoring for Spain in the 17th minute, guiding Mikel Oyarzabal’s cross from the left wing into the back of the net with a well-struck volley. Italy’s woes were compounded in the final 10 minutes of the opening half as the reigning European champions not only went a man down but also surrendered another goal during this stretch.

The Azzurri were reduced to 10 men in the 42nd minute after Leonardo Bonucci was handed a red card for a second bookable offense. Torres then piled more misery on the Italians in the first half stoppage time, scoring a header off another cross by Oyarzabal.

Torres has been a revelation for the Spaniards lately, scoring 11 international goals for the senior national team since September 1, 2020. He has been lethal with his finishing, with six of Torres’ last seven shots on target ending in a goal for Spain. His two goals against Italy were his only shot attempts in that game.

The Italians refused to quit as they battled back strongly in the second half. Roberto Mancini decided to insert veteran defender Giorgio Chiellini in place of attacker Federico Bernardeschi at half-time to shore up the hosts’ defense.

After scoring a tap-in off a pass by Federico Chiesa, Lorenzo Pellegrini sliced the deficit to just a single goal. However, they failed to grab the equalizer as the Italians slumped to their first defeat in a competitive match on home soil since September 1999 when they lost to Denmark, 3-2.

It was a disappointing loss for the Azzurri, who conceded twice for the first time in 40 international matches. Goalkeeper Gianluigi Donnarumma looked out of sorts in this match as he was affected by the jeering of his own home supporters. Donnarumma drew the ire of the Italian fans in attendance after leaving AC Milan this past offseason to join Paris Saint-Germain.

Italy’s unbeaten record was snapped by one of the youngest Spanish teams in recent memory. Barcelona midfielder Gavi made history in this contest as he became the youngest player to make his international debut for Spain, playing for La Roja at the young age of 17 years and 62 days.