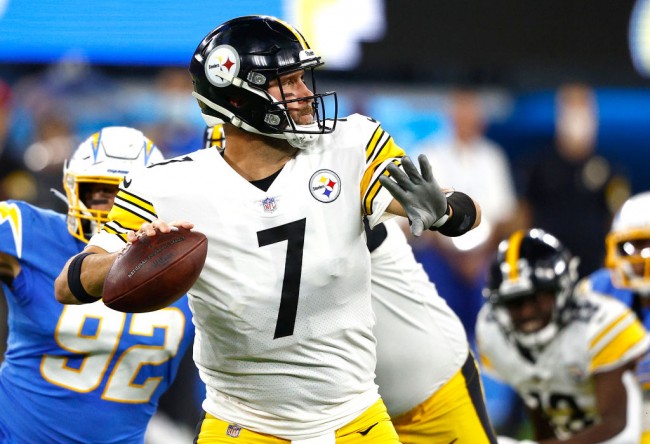 INGLEWOOD, CALIFORNIA – Ben Roethlisberger #7 of the Pittsburgh Steelers looks to throw the ball during the second quarter of the game against the Los Angeles Chargers at SoFi Stadium on November 21, 2021 in Inglewood, California. (Photo : Ronald Martinez/Getty Images)

A key AFC North showdown will commence in Week 12 as the Cincinnati Bengals host the Pittsburgh Steelers at the Paul Brown Stadium. Both teams trail the Baltimore Ravens in the division standings, so victory is paramount for the Bengals and the Steelers in this contest. Here’s a breakdown of the Steelers vs Bengals matchup.

Pittsburgh’s West Coast trip ended in disappointment as the Steelers’ second-half rally fell short against the Los Angeles Chargers in Week 11. Trailing by 17 points at the start of the fourth quarter, the Steelers went on a blistering run and managed to grab a 37-34 lead with 3:24 remaining. However, Mike Williams quashed Pittsburgh’s comeback bid, scoring a 53-yard touchdown with 2:09 left to hand LA the 41-37 win.

It was a frustrating outcome for the Steelers, who failed to win for the second consecutive game. They are now ranked third in the AFC North standings with a 5-4-1 record, trailing Baltimore and Cincinnati, who are first and second, respectively.

They can move back up to second with a win over Cincinnati in Week 12. For that to transpire, the Steelers need another quality performance from Ben Roethlisberger. He was superb in the loss to the Chargers, completing 28 of 44 passes for 273 yards with three touchdowns and no interceptions. Big Ben has a 104.3 passer rating over his last five outings, recording nine touchdowns and no picks during that stretch.

The Steelers have struggled against the Bengals lately, losing each of their last two meetings. Cincinnati defeated Pittsburgh, 24-10, at Heinz Field earlier this season.

The Cincinnati Bengals finally snapped their two-game losing skid with a resounding 32-13 victory over the Las Vegas Raiders at Allegiant Stadium. It was a big win for the Bengals, who kept pace with the Baltimore Ravens in the AFC North title race, trailing them by just a game heading into Week 12.

Joe Mixon starred for the Bengals in the Week 11 win, rushing for 123 yards and a couple of touchdowns. Mixon started slowly in this contest, averaging just 2.4 yards on 11 carries in the opening half. He ratcheted up the intensity in the second half, averaging 6.5 yards on 19 carries to help Cincinnati cruise to the easy win.

The Bengals made it a point following their bye week to give the ball to Mixon, whose 30 carries against Las Vegas were a season-high. Mixon ran for just 97 yards combined in their previous losses to the Cleveland Browns and the New York Jets.

For the Bengals to complete the season sweep against the Steelers, they will need to continue their excellent play on the defensive end. They limited Las Vegas to just 278 total yards in Week 11; the second time this season, the Bengals held an opponent to fewer than 300 yards in a contest.