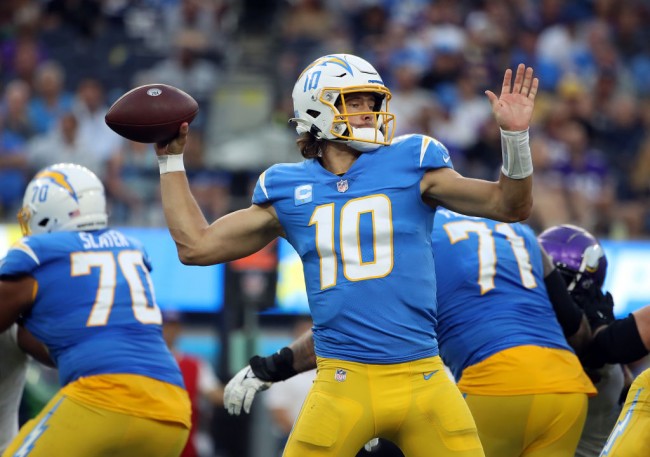 INGLEWOOD, CALIFORNIA – NOVEMBER 14: Justin Herbert #10 of the Los Angeles Chargers throws a pass during the second half of the game against the Minnesota Vikings at SoFi Stadium on November 14, 2021 in Inglewood, California. (Photo : Katelyn Mulcahy/Getty Images)

The Pittsburgh Steelers featured in the first tie of the 2021 NFL season as they settled for a 16-16 stalemate against the still winless Detroit Lions in Week 10. The Steelers will look to return to the win column in Week 11 when they travel to LA to face the reeling Chargers. Here’s a preview of the Steelers vs Chargers game.

The Pittsburgh Steelers had their four-game winning streak snapped on Sunday with a demoralizing 16-16 tie against the hapless Detroit Lions in Week 10. The Steelers struggled mightily without their starting quarterback Ben Roethlisberger, who tested positive for COVID-19 the night before the game.

Even though Roethlisberger is vaccinated, head coach Mike Tomlin said that the veteran quarterback is symptomatic, leaving his status for the crunch Week 11 clash against the Chargers up in the air.

Another key member of the Steelers tested positive for the coronavirus after the game with safety Minkah Fitzpatrick placed on the COVID-19 list. Missing Fitzpatrick for Sunday’s showdown against LA would be another huge blow to a Pittsburgh defense that is already dealing with injuries to All-Pro pass rusher T.J. Watt and cornerback Joe Haden.

If Big Ben still can’t get go for that game, Mason Rudolph will again get the starting nod for the Steelers under center. He completed 30 of 50 passes for 242 yards with one touchdown and one interception in Week 10. Rudolph struggled in key situations for the Steelers, missing easy passes to Ray-Ray McCloud and Diontae Johnson in the second half that stalled what could have been touchdown drives against the Lions.

Los Angeles’ losing woes show no sign of ending as the Chargers suffered a 27-20 defeat at the hands of the Minnesota Vikings in Week 10. The Chargers have now lost three of their last four games to drop to 5-4. They now trail the Kansas City Chiefs by a half-game in the AFC West standings.

The Chargers will look to get their season back on track in Week 11 when they host the injury-plagued Pittsburgh Steelers. It is important for LA that Justin Herbert gets his game going in this matchup. He completed 20 of 34 passes for 195 yards with one touchdown and one interception in the loss to the Vikings.

The Chargers need to establish their run game against the Steelers for them to pull off the home win. They managed just 82 yards rushing in the loss to Minnesota. The Chargers recorded just 253 total yards in Week 10, a far cry from their average of 370.2 yards per game this season.

On the defensive side of the ball, the Chargers need to put the clamps on Najee Harris. The rookie running back was the lone bright spot for Pittsburgh on the offensive end in Week 10, running for 105 yards on 26 carries against Detroit.

Everything About Information Security Analysts at a Glance

The 10 Most Revolutionary Blockchain Cloud Storage Companies in 2021 |