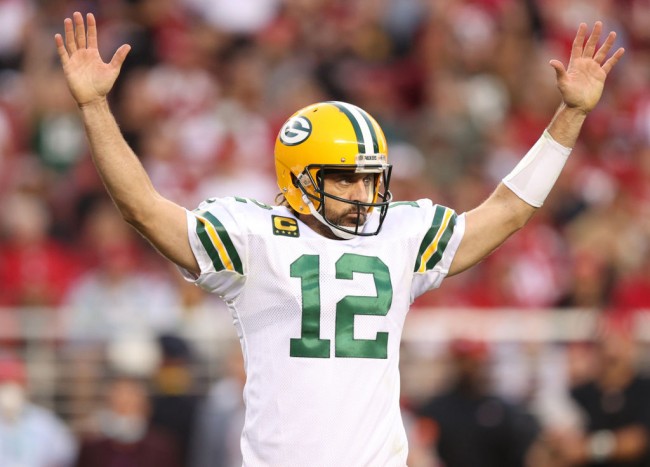 SANTA CLARA, CALIFORNIA – Aaron Rodgers of the Green Bay Packers celebrates after a touchdown during the second quarter against the San Francisco 49ers in the game at the Levi’s Stadium on September 26, 2021 in Santa Clara, California. (Photo : Ezra Shaw/Getty Images)

All eyes will be at Lambeau Field this coming Sunday as legendary quarterbacks Aaron Rodgers and Ben Roethlisberger lock horns in the Pittsburgh Steelers vs. Green Bay Packers Week 4 game. The Steelers look to snap their two-game losing streak against a Packers team that has won two straight after a 35-point loss in Week 1.

It looks like age has finally caught up with Ben Roethlisberger. The Steelers quarterback looked out of sorts in the 24-10 loss to the Cincinnati Bengals on Sunday, completing 65.5 percent of his passes for 318 yards, one touchdown, a couple of interceptions, and a low passer rating of 70.9.

Roethlisberger’s interceptions were abysmal, to say the least, handing Cincinnati its largest win over Pittsburgh in 26 years. Those picks resulted in touchdowns for the Bengals, a huge blow for the Steelers given their poor form on the offensive end. Roethlisberger was sacked four times by the Bengals as he finished the game with an average of just 5.5 yards per passing attempt, his lowest of the season.

Apart from Big Ben, another primary concern for the Steelers is their defense. With linebackers T.J. Watt and Alex Highsmith sidelined, the Steelers weren’t able to pressure Joe Burrow as their record 75-game streak with a sack finally ended. Burrow made them pay; as a result, completing 14 of 18 passes for 172 yards, with three touchdowns and an interception.

It won’t get any easier for the Steelers in Week 4 with the great Aaron Rodgers standing in their way. He was back to his best in the win against San Francisco, going 23 of 33 for 261 yards with two scores and no interceptions.

Aaron Rodgers has done it again. The Packers quarterback broke 49ers fans’ hearts on Sunday night, engineering a scoring drive with 37 seconds left and no timeouts remaining to lead Green Bay to a dramatic 30-28 win over San Francisco.

Rodgers had two deep connections with Davante Adams on that last-minute drive, helping set up Mason Crosby’s game-winning 51-yard field goal as time expired. It was a remarkable response by the Packers, who suddenly found themselves trailing after a late Kyle Juszczyk touchdown.

Adams caught passes of 25 and 17 yards from Rodgers in that last-gasp drive, an incredible feat given that Jimmie Ward took him out with a hard hit just minutes earlier. Adams cleared concussion protocols, though, to help the Packers record their second consecutive win.

The Packers now set their sights on a 3-1 start when they host the Pittsburgh Steelers this coming Sunday. Rodgers and Adams will be licking their chops at the prospect of facing a Pittsburgh defense that allowed three passing touchdowns in the Week 3 loss to the Bengals.

Top Characteristics of Explainable AI for Organizations to Leverage

How will Blockchain Change the Automotive Industry in the Future?