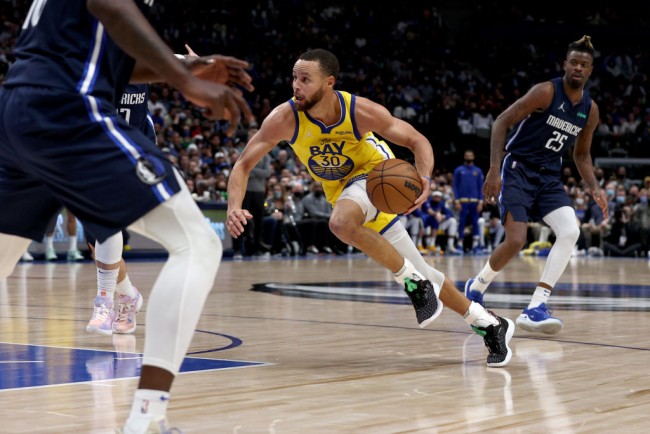 DALLAS, TEXAS – Stephen Curry #30 of the Golden State Warriors drives to the basket against Reggie Bullock #25 of the Dallas Mavericks in the third quarter at American Airlines Center on January 05, 2022 in Dallas, Texas. (Photo : Tom Pennington/Getty Images)

The Golden State Warriors had their two-game winning streak snapped on Wednesday, January 5, with a 99-82 loss to the Dallas Mavericks. The Warriors share the best slate in the NBA with the Phoenix Suns, with similar 29-8 records.

Steph Curry struggled for the second consecutive game, scoring 14 points on 5 of 24 shooting from the field. He was abysmal from beyond the arc, missing eight of his nine 3-point attempts against the Mavs.

Curry is in the midst of a shooting slump, connecting on just 19.5 percent (8 of 41) of his field-goal attempts in the last two games. That is Curry’s worst field goal percentage over a two-game stretch in his career. Curry, who owns the record for the most threes in the NBA, missed 17 of his 19 attempts from deep during that span. He managed to score just 23 points during that stretch.

To make matters worse for Curry, he suffered a quad contusion in the loss to the Mavericks. Curry was seen hobbling during the second half but remained to finish the contest. Curry said after the game that the way his injury feels right now, he is not optimistic about playing in New Orleans.

Head coach Steve Kerr echoed those sentiments, saying that there is a chance Curry won’t play in the game against the Pelicans. Kerr said that Curry has “got a pretty good quad contusion and those generally get worse overnight.” With the Pelicans game coming on the second night of a back-to-back, it is more than likely that Curry will sit that contest out.

Doncic makes it a double celebration for Dallas

The Mavericks produced one of their best performances of the season on a night they retired franchise icon Dirk Nowitzki’s No. 41 jersey. Four players scored in double figures for the Mavs, who extended their winning streak to a season-best four games.

It is not a complete surprise that Dallas’ winning run has come with the return of Luka Doncic. He missed 10 games because of ankle and knee injuries, as well as a positive COVID-19 test. Doncic has returned with a bang, with Dallas going 3-0 in his last three games.

He filled the stat sheet against the Warriors, scoring 26 points, dishing out eight assists, and grabbing seven rebounds. Doncic was aggressive from the get-go, making 10 of his 12 free throw attempts. Dorian Finney-Smith and Jalen Brunson were the other starters to score in double digits, adding 17 and 15 points, respectively. Tim Hardaway Jr. delivered quality minutes off the bench with 14 points and three rebounds.

The Mavs managed to pull off the win without Kristaps Porzingis, who was placed on the league’s health and safety protocols. They were excellent on the defensive end, limiting Golden State to just 18 percent shooting (5 of 28) from the 3-point area.

Top 10 Cryptocurrency Mining Platforms to Try Out in 2022