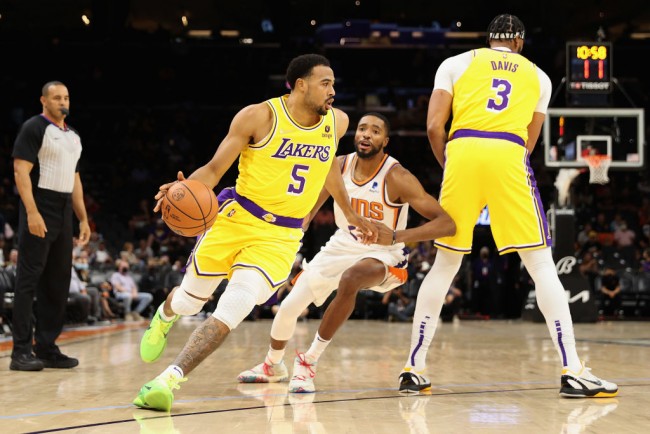 PHOENIX, ARIZONA – Talen Horton-Tucker (#5) of the Los Angeles Lakers handles the ball against Mikal Bridges (#25) of the Phoenix Suns during the first half of the NBA preseason game at the Footprint Center on October 06, 2021 in Phoenix, Arizona. The Suns defeated the Lakers 117-105. (Photo : Christian Petersen/Getty Images)

The Los Angeles Lakers’ preparations for the upcoming 2021-22 NBA season took a huge hit on Monday, with forward Talen Horton-Tucker set to undergo surgery to repair torn ligaments in his right thumb.

Horton-Tucker, who just signed a three-year, $32 million extension with the Lakers this past offseason, had been in fine form for Los Angeles before his injury. During the preseason, he was the team’s second-leading scorer, averaging 12.7 points on 39.3 percent shooting from the field in three outings for the Lakers. Horton-Tucker also improved his outside shooting, burying 36.4 percent of his attempts from the deep.

Horton-Tucker, a huge loss for Lakers ahead of 2021-22 season

This season, the Lakers had high expectations for Horton-Tucker after making him the fourth-highest paid player on their roster. General manager Rob Pelinka said that “Talen has got to establish himself as a dominant defensive player.” Head coach Frank Vogel echoed Pelinka’s sentiments, saying that Horton-Tucker needs to be the main guy for the Lakers on the defensive end.

Horton-Tucker’s thumb issue is the second significant injury to hit the 17-time NBA champions before the new season. Trevor Ariza is expected to be sidelined for at least two months after undergoing surgery on his injured right ankle last week. Malik Monk is also currently sidelined after picking up a groin injury.

Suddenly, the Lakers have problems with their depth on the wing ahead of their season opener against the Golden State Warriors on October 19. With Horton-Tucker and Ariza sidelined for the foreseeable future and Monk having groin issues of his own, the Lakers will need to get valuable production from Kent Bazemore, Wayne Ellington, and Kendrick Nunn.

The Lakers may also give some minutes to rookie Austin Reaves, who had been playing well on the wing for Los Angeles this preseason. He has proven to be a legitimate threat from the deep, knocking down 41.2 percent of his three-pointers while averaging 8.2 attempts from beyond the arc per 36 minutes.

With the spate of injuries hitting the Lakers right now, the onus is on the veteran trio of LeBron James, Russell Westbrook, and Anthony Davis to steady the ship for Los Angeles. They are set to start for the first time together on Tuesday in their preseason game against the Warriors.

The Lakers have staggered the off nights of their Big Three, a major reason why they remain winless in the preseason after four games. The Lakers have the oldest team in the NBA right now, with 10 of their players at least 32 years old. Injuries are not helping the Lakers’ cause to spread the minutes around, with James and Westbrook expected to be given more playing time due to Ariza and Horton-Tucker’s surgeries.

5 Do's and 5 Don'ts of an Artificial Intelligence Interview

AIOps Trends and Predictions in 2022: Everything You Need Know