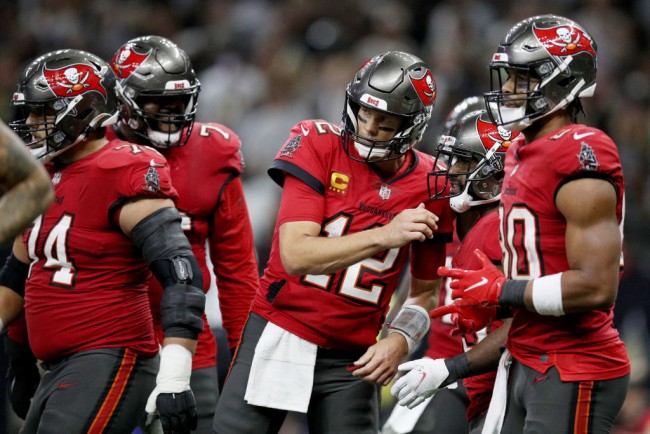 NEW ORLEANS, LOUISIANA – Tom Brady (#12) of the Tampa Bay Buccaneers talks with the offense during the third quarter against the New Orleans Saints at Caesars Superdome on October 31, 2021 in New Orleans, Louisiana. (Photo : Sean Gardner/Getty Images)

The Tampa Bay Buccaneers had their four-game winning streak snapped in Week 8, losing to division rival New Orleans Saints at the Caesars Superdome. The Bucs hope to get back into the win column in Week 10 when they face the Washington Football Team in a rematch of their NFC Divisional Round meeting last season. Here’s a breakdown of this Tampa Bay vs Washington clash.

Tampa Bay’s bye week could not have come at a much suitable time after the Buccaneers absorbed a shocking 36-27 defeat at the hands of the New Orleans Saints in Week 8. The Bucs failed to take advantage of Jameis Winston’s injury mid-game as they slumped to their first defeat since their Week 3 loss to the Los Angeles Rams.

The Bucs looked like they were on their way to a memorable come-from-behind win after turning a 16-point deficit in the third quarter into a 27-26 advantage in the fourth quarter. They failed to protect that lead, though, with the Saints scoring the game’s final 10 points, the last of which came via P.J. Williams’ pick-six with 1:24 remaining.

Tom Brady owned up to his late interception, saying he had Mike Evans open and cost the Bucs the game. Brady struggled mightily against the Saints, committing three turnovers. He is 1-3 against the Saints since moving to Tampa Bay, with Brady committing a total of eight turnovers in those four games.

The good news for Brady and the Bucs is that Washington will be their next opponents in Week 10. Brady has 71 touchdown passes and just 19 turnovers in the 24 other games he has played since joining Tampa Bay last year.

Washington headed into its bye week in a state of disarray after suffering yet another defeat in Week 8. They now trail the Dallas Cowboys by four games in the NFC East division after a 17-10 loss to the Denver Broncos. Washington has now lost six of its first eight games this season, including its last four outings.

It won’t get any easier for them in Week 10 as Washington will face a Bucs team that has won six of its first eight games this season. It’s critical for Washington that Taylor Heinicke plays mistake-free football in this contest. He struggled mightily against the Broncos, completing just 24 of 39 passes for 270 yards with one touchdown and two interceptions.

Justin Simmons picks off the Taylor Heinicke Hail Mary and the Broncos end the half 10-3 over Washington. pic.twitter.com/gBPqHypRg1

Heinicke has already faced the Bucs once before, going toe-to-toe with Brady in the 2020 NFC Wild Card Round. The legend of Heinicke started in that playoff encounter with the Washington QB throwing for 306 yards and a touchdown and running for 46 yards and a score.

Washington’s defense has regressed since that postseason game, with Ron Rivera’s men ranked 27th in the NFL in points and total yards allowed. To make matters worse for Washington, defensive end Montez Sweat suffered a broken jaw in the loss to the Broncos and will miss at least a month because of the injury.

Top Robotics Companies Working as a Service Provider in 2021

10 Data Science Online Courses Every College Passed Out Should Take