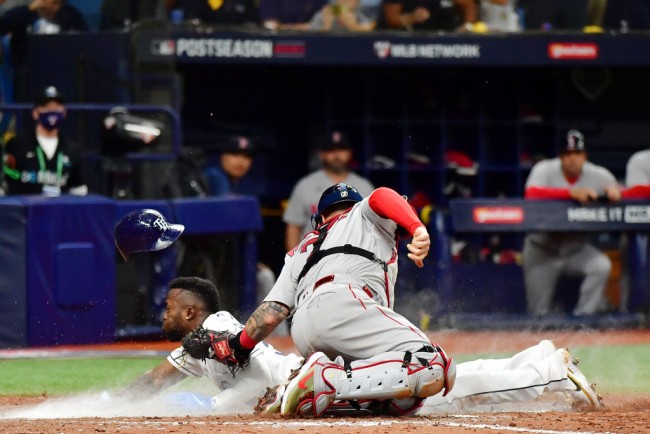 The Tampa Bay Rays and the Houston Astros moved to within two victories of reaching the American League Championship Series after winning their respective openers in the ALDS against the Boston Red Sox and the Chicago White Sox.

The Tampa Bay Rays grabbed a 1-0 lead in the American League Division Series after beating the Boston Red Sox, 5-0, in Game 1 at Tropicana Field. In this one-sided win, Randy Arozarena starred for the Rays, becoming the first player in MLB history to hit a homer and steal home in the same game.

Arozarena took his chance against Red Sox lefty reliever Josh Taylor, darting to the plate in the seventh inning to give Tampa Bay a five-run lead. Arozarena’s steal marked the first swipe of home in a postseason game since 2016 when Javy Baez pulled off the feat for the Chicago Cubs in the NLCS.

This is also the first time someone successfully pulled off a straight steal of home in the playoffs, with Jackie Robinson the last player to accomplish that feat in 1955 against the New York Yankees.

Arozarena now has 11 homers in his postseason career, tying him with Jim Thome and Carlos Beltran for second-most dingers in a 20-game playoff span. Only Babe Ruth has more homers to start a postseason career, with the legendary slugger blasting 12 home runs in his first 20 playoff outings.

Game 2 will take place Friday at Tropicana Field with 7:02 PM ET as the start time. Chris Sale will start for the Boston Red Sox in this contest against rookie Shane Baz, who will take the mound for the Tampa Bay Rays.

Lance McCullers gave the Astros a perfect start in their American League Division Series against the Chicago White Sox, pitching scoreless ball into the seventh inning to lead Houston to a comprehensive 6-1 win in Game 1.

McCullers was excellent in his eighth career postseason start, allowing no runs and four hits in 6 2/3 innings of action. The Astros have now won eight straight in the opener of the division series, dating back to the 2004 NLDS against the Atlanta Braves.

The White Sox had no answer for McCullers, who did not allow a hit until the fourth inning when Yoán Moncada singled with one out. He departed to a standing ovation after giving up back-to-back singles with two outs in the seventh inning.

Nothing but love from @astros fans as Lance McCullers Jr. exits after throwing 6.2 innings in Game 1 💪 pic.twitter.com/y1dyz20PEX

Game 2 will take place Friday at the Minute Maid Park with 2:07 PM ET as the start time. Lucas Giolito will start for the Chicago White Sox in this contest against Framber Valdez, who will take the mound for the Houston Astros.

Want to Become a Data Manager? Here is All You Need to Know!