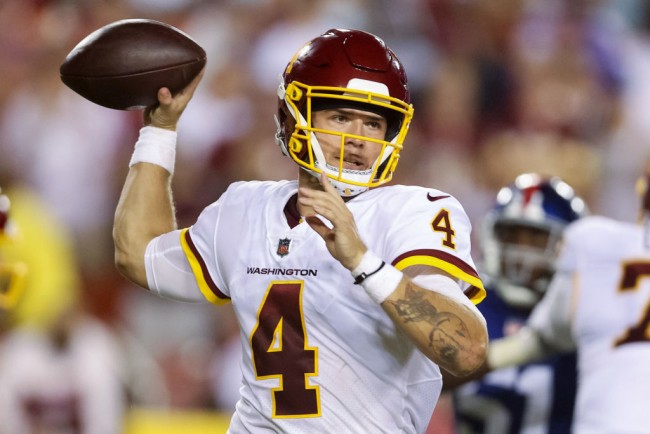 LANDOVER, MARYLAND – Taylor Heinicke of the Washington Football Team looks to pass during the second quarter against the New York Giants at the FedExField on September 16, 2021 in Landover, Maryland. (Photo : Rob Carr/Getty Images)

Taylor Heinicke made sure the Washington Football Team would be just fine even without Ryan Fitzpatrick. The newly installed starting quarterback fueled a thrilling come-from-behind 30-29 victory over the New York Giants on Thursday night. It was a disappointing loss for the Giants, who wasted several chances to seal the win in the fourth quarter.

Heinicke made amends after throwing a costly interception in the dying minutes that gave the Giants a 29-27 lead. He didn’t panic in the ensuing two-minute drive, putting Washington in a position to seal the victory with a buzzer-beating field goal.

Giants denied victory after a costly penalty in the final seconds

Giants fans thought they escaped Maryland with a victory after Dustin Hopkins missed his 48-yard field goal attempt. Much to their dismay, an offsides penalty was called on Dexter Lawrence during that missed field goal attempt, gifting Hopkins another opportunity to kick the game-winner. Hopkins made sure he didn’t waste his second chance as he converted the ensuing 43-yard field goal attempt to hand Washington its first win of the season.

Taylor Heinicke could not have placed this ball any better. And what a grab by RIcky Seals-Jones. This game has been awesome.

The victory wouldn’t be possible without the late-game brilliance of Heinicke, who helped regain the lead for Washington twice in the fourth quarter. After the Giants scored a field goal in the final period to stretch their lead to 26-20, Heinicke immediately went to work, making two monster throws in succession to hand Washington a 27-26 advantage.

He first threw a superb pass to running back J.D. McKissic, who tiptoed down the right sideline for a 56-yard gain. Heinicke then found the end zone a play later, throwing a perfect lofted pass to tight end Ricky Seals-Jones, who recorded a leaping 18-yard touchdown reception.

Heinicke finished the game with 336 passing yards and a couple of touchdowns. Not a bad performance for a guy who was making just his third career regular-season start in the NFL. Heinicke’s last start for Washington made him an instant fan favorite in this part of town as he went toe-to-toe with seven-time Super Bowl winner Tom Brady in the NFC Wild Card game.

In that contest, the former undrafted free agent wasn’t fazed at all, throwing for 306 yards and a touchdown in a 31-23 loss to Tampa Bay. Heinicke was rewarded a two-year contract because of that performance, but coach Ron Rivera opted to go with new signing Ryan Fitzpatrick as Washington’s quarterback for the 2021 season.

However, Fitzpatrick injured his right hip in the Week 1 clash against the Chargers, opening another opportunity for Heinicke to become Washington’s starting quarterback for good. With the grit and maturity he is displaying as the starter, it won’t be long before the job is permanently his.

Don't Know to Code? You Can Still Opt for These Top Data Science Jobs