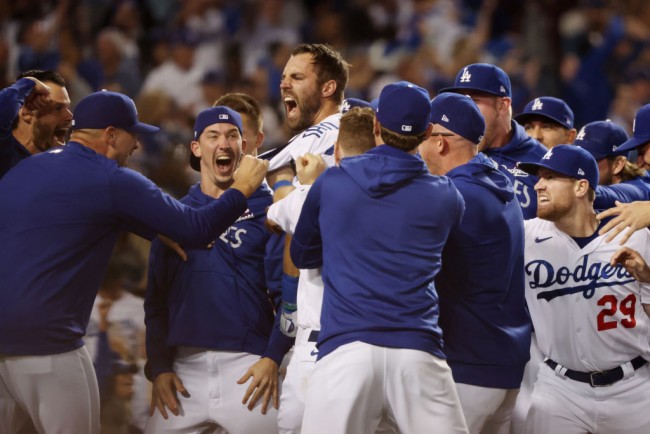 LOS ANGELES, CALIFORNIA – Chris Taylor (#3) of the Los Angeles Dodgers celebrates with teammates after his walk off two-run home run in the ninth inning to defeat the St. Louis Cardinals, 3-1, during the National League Wild Card Game at the Dodger Stadium on October 06, 2021 in Los Angeles, California. (Photo : Harry How/Getty Images)

On Wednesday night, the Los Angeles Dodgers advanced to the National League Division Series after beating the St. Louis Cardinals, 3-1, in dramatic fashion in the NL Wild Card Game. Chris Taylor delivered a walk-off two-run homer in the bottom of the ninth inning to give the Dodgers another memorable come-from-behind postseason win and set up a mouth-watering clash with the San Francisco Giants in the NLDS.

Cody Bellinger started the Dodgers rally in the ninth inning, drawing a two-out walk from T.J. MacFarland. The Cards decided to make a pitching change after that walk, inserting Alex Reyes to face Taylor. That decision backfired as Taylor blasted a 2-1 breaking ball into the left-field seats, sending Dodgers fans in attendance into a frenzy.

Taylor had been dealing with a recurring neck injury that forced him to struggle badly in September. Such was the dip in his performance that he was benched in the NL Wild Card Game. In the seventh inning, Taylor eventually came off the bench after a double switch and produced just the fourth walk-off home run in Dodgers postseason history.

It was a disappointing end to the season for the Cards, who went on a torrid 17-game winning streak in September to secure a spot in the NL Wild Card Game. The Cards failed to take advantage of their opportunities in the knockout game, finishing 0-for-11 with runners in scoring position.

Dodgers to face Giants next in NLDS

The Dodgers’ reward for the Wild Card win is a meeting with NL West rivals San Francisco in the Division Series, the first time they will square off in the postseason. This year, the Giants narrowly won the division title over the Dodgers, with San Francisco’s 107-win season barely beating LA’s historic 106-win campaign.

The stakes now are much higher, with a spot in the National League Championship Series on the line for both teams. Dodgers manager Dave Roberts described the upcoming matchup perfectly, saying, “One of the great rivalries in sports. It’s happening.”

Giants manager Gabe Kapler already announced his starting pitchers for Games 1 and 2, with Logan Webb getting the nod for the opener and Kevin Gausman taking the mound the following day. This season, Webb has been exceptional for the Giants, posting an 11-3 record with a 3.03 ERA, 1.106 WHIP, and 156 strikeouts. On the other hand, Gausman won a team-high 14 games for San Francisco this year, recording a 2.81 ERA over 33 starts.

Top 10 Quantum Computing Workshop and Conferences to Attend in 2021

Know the Relationship between AI and Software Engineering