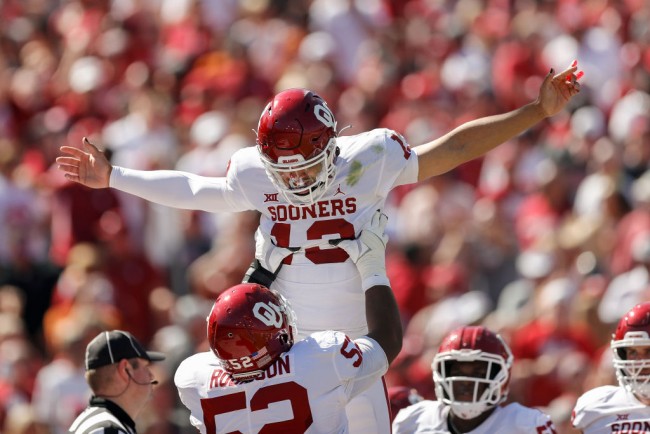 DALLAS, TEXAS – Oklahoma Sooners’ Tyrese Robinson (#52) celebrates with Caleb Williams (#13) after a touchdown in the first half against the Texas Longhorns during the 2021 AT&T Red River Showdown at the Cotton Bowl on October 09, 2021 in Dallas, Texas. (Photo : Tim Warner/Getty Images)

The Oklahoma Sooners jumped to No. 4 in the AP Top 25 poll after their incredible comeback win over Texas in the Red River Showdown in Week 6. They will look to cement their standing in the top 5 this Saturday when they host the TCU Horned Frogs. Here’s our preview to see who has the edge in this TCU vs Oklahoma Week 7 game.

The TCU Horned Frogs finally snapped their two-game losing skid with a resounding 52-31 victory over Texas Tech in Week 6. It was a huge bounce-back win for the Horned Frogs, who suffered narrow losses to SMU and Texas in Weeks 4 and 5. With the victory, TCU improved its record this season to 3-2.

They will look to make it back-to-back victories when they lock horns with the red-hot Oklahoma Sooners in Week 7. One guy who needs to step up for TCU in this game is Kendre Miller. He punished Texas Tech’s defensive line, rushing for 185 yards and three touchdowns.

In that contest, Zach Evans also contributed for the Horned Frogs, running for 143 yards and two scores for his fourth consecutive 100-yard rushing game. It was the third time in TCU’s six games that Evans and Miller both had at least 100 yards rushing.

The Horned Frogs wreaked havoc on the ground in Week 6, recording 394 rushing yards in total, their most since putting up 431 yards in a 62-22 victory at Baylor in 2016. However, Miller and Evans will have their work cut out for them against an Oklahoma team that is eighth in the FBS in rushing defense, allowing just 86.8 yards per game on the ground this season.

The Oklahoma Sooners have a quarterback controversy on their hands heading into Saturday’s showdown with the TCU Horned Frogs. Head coach Lincoln Riley has refused to name his starter for Week 7, making Sooners fans wonder who will get the nod between Spencer Rattler and Caleb Williams.

Rattler had a horrible showing in the Red River Showdown, completing just 8 of 15 passes for 111 yards with no touchdowns and one interception as he was benched in the game against Texas. However, Rattler’s loss was Williams’ gain as the freshman quarterback made a star turn in Oklahoma’s biggest game of the year.

Trailing 28-7 after the opening quarter, Williams inspired the Sooners’ come-from-behind win. He recorded 300 yards of total offense and three touchdowns to lead Oklahoma to a thrilling 55-48 victory over Texas. Williams dazzled on his first carry, running for a 66-yard touchdown to start the comeback in the second quarter.

The Sooners’ offense ignited with Williams under center, finishing the game with 662 total yards, third-most ever against Texas. Given his dual threat, the pressure is clearly mounting on Riley to install Williams as the Sooners’ starting quarterback. He completed 16 of 25 passes for 212 yards with two touchdowns through the air and recorded four carries for 88 yards and a score on the ground in the win against the Longhorns.

Oklahoma wins and covers the spread.

After Surviving the Crypto Wave for a Decade, Where is Litecoin Headed?