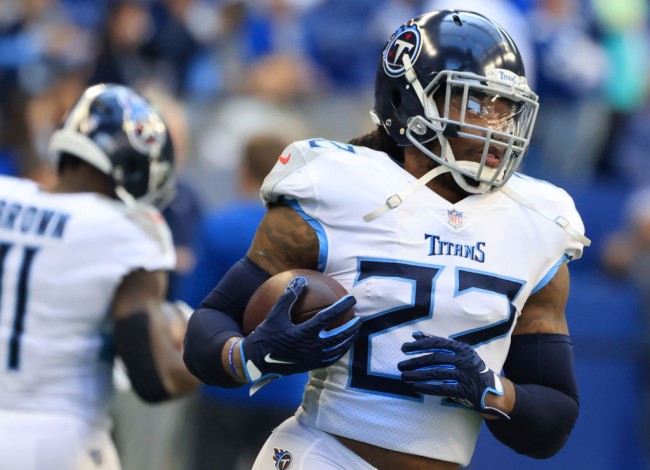 INDIANAPOLIS, INDIANA – Derrick Henry (#22) of the Tennessee Titans warms up before a game against the Indianapolis Colts at Lucas Oil Stadium on October 31, 2021 in Indianapolis, Indiana. (Photo : Justin Casterline/Getty Images)

The Tennessee Titans signed veteran running back Adrian Peterson to their practice squad after receiving some unfortunate news. Star running back Derrick Henry is set to miss the next 6-10 weeks after suffering a right foot injury during Sunday’s 34-31 win over the Indianapolis Colts. His absence will be a huge blow for the Titans, who surged to the top of the AFC standings because of the exemplary work of Henry on the ground.

From NFL Now: #Titans RB Derrick Henry will have foot surgery tomorrow morning and be out 6-10 weeks. Six would be quite fast, eight is more likely. Either way, Tennessee expects Henry back this season. pic.twitter.com/UzoJqNlcFF

Henry went to the bench early in the Week 8 game against the Colts as he was shown on TV talking to trainers with his right shoe off with 6 minutes, 3 seconds remaining in the first quarter. He managed to return, though, and even finished the overtime contest. Henry played 54 of the 73 offensive snaps, racking up 68 yards on 28 carries for a 2.4-yard average, his lowest of the season.

The Titans are running thin on the running back ranks, with backup Darrynton Evans also placed on injured reserve last week. To help address that shortage in personnel, it is expected that Adrian Peterson will be added to the active roster soon.

Peterson has 14,820 total rushing yards in his illustrious career, just 449 shy of Barry Sanders for fourth-most all time. He rushed for 604 yards and seven touchdowns on 156 carries with the Detroit Lions last season.

Henry to have surgery on injured right foot on Tuesday

Henry took some tests on Monday morning to check the severity of his foot injury, and the results were not good. He will have surgery on Tuesday morning to address the problem on his right foot, with Titans coach Mike Vrabel not putting a timeline on when his star running back will return.

However, sources have told ESPN‘s Adam Schefter that Henry is expected to miss the rest of the 2021 season because of the injury and ensuing surgery, which is the worst-case scenario for the Titans. Vrabel said that the Titans have to move on and not look back with Henry sidelined for the foreseeable future.

The Titans will find it difficult moving forward as Henry was an integral part of their offense. The two-time NFL rushing champ was well on his way to grabbing his third rushing title, leading the league with 937 yards rushing and 10 touchdowns through the Titans’ first eight games. Henry also had the most rushes this season with 219, 82 carries more than the second-leading rusher Joe Mixon.

Investors Get Shot with US$3.38 Million

The 6 Best Lead Generation Strategies For Growing Your Firm