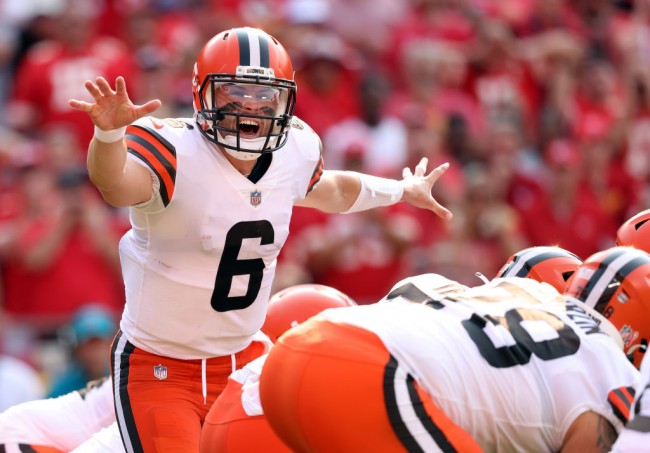 KANSAS CITY, MISSOURI – Quarterback Baker Mayfield (#6) of the Cleveland Browns calls out the play during their game against the Kansas City Chiefs at the Arrowhead Stadium on September 12, 2021 in Kansas City, Missouri. (Photo : Jamie Squire/Getty Images)

Houston’s 2021 NFL season is off to an incredible start after the Texans destroyed the Jacksonville Jaguars by 16 points in their opening match on Sunday. The Texans will look to build on that huge win when they square off with the Cleveland Browns in an AFC showdown at the FirstEnergy Stadium this coming Sunday.

No Deshaun Watson? No problem! Houston chalked up its first win of the season with a comprehensive 37-21 victory over Jacksonville on Sunday. It was a morale-boosting win for the Texans, who led wire-to-wire in this contest.

In this victory, Tyrod Taylor starred for the Texans, completing 21 of 33 passes for 291 yards and two touchdowns. His 112.1 passer rating in the win against the Jaguars was the second-highest by a Texan quarterback in a season opener.

Not many were expecting Taylor to ball out against Jacksonville, considering he hadn’t recorded at least 200 passing yards in a game since 2018 when he was still a member of the Cleveland Browns. Texan fans were no doubt fearing the worst when Taylor threw incompletions in each of his first three pass attempts.

He started to settle down after that series, though, leading the Texans to a quick 14-0 lead in the opening quarter after touchdowns by Mark Ingram II and David Johnson. They stretched that lead to 20 points seconds before the break after Taylor threw a touchdown pass to new signing Danny Amendola.

The Texans continued to pile on the pressure in the second half, cruising to a 16-point win which was their first season-opening victory since 2016. The Texans now set their sights on a possible 2-0 start when they take on the Cleveland Browns this coming Sunday.

For the Texans to achieve this feat, they will need Taylor and Brandin Cooks to continue their excellent partnership. Cooks wreaked havoc against Jacksonville’s secondary, catching five passes for 132 yards, including a pair of deep receptions that led to two touchdowns for Houston at the end of each drive.

Cleveland’s Week 1 woes continued on Sunday as the Browns suffered a gut-wrenching 33-29 loss to the Kansas City Chiefs at the Arrowhead Stadium. With the defeat, the Browns fell to 1-21-1 in season openers since the franchise returned to Cleveland in 1999, stretching their NFL mark to 17 consecutive losses in Week 1. The Browns haven’t won an opener on the road since the 1994 season.

What makes this defeat such a bitter pill to swallow for Browns fans, though, is that Cleveland had the game under control until the very last quarter. They were up by 12 points entering the half-time break and still held a 29-20 advantage in the fourth quarter after Kareem Hunt scored a touchdown to finish a seven-play, 75-yard drive.

Patrick Mahomes happened again, though, uncorking a 75-yard touchdown pass to Tyreek Hill to cut the Browns’ lead to two. Browns punter Jamie Gillan then committed the error of the night, dropping the snap and handing the ball back to Kansas City at the Cleveland 15. Travis Kelce scored three plays later for the final score of the game.

It is paramount for the Browns to limit those errors against a Texans defense which forced Trevor Lawrence to throw three interceptions in his NFL debut. One guy who needs to step up is Baker Mayfield. Even though he recorded 321 passing yards against Kansas City, he failed to record a single touchdown in that game. He had a costly fourth-quarter interception that doomed Cleveland’s comeback bid.