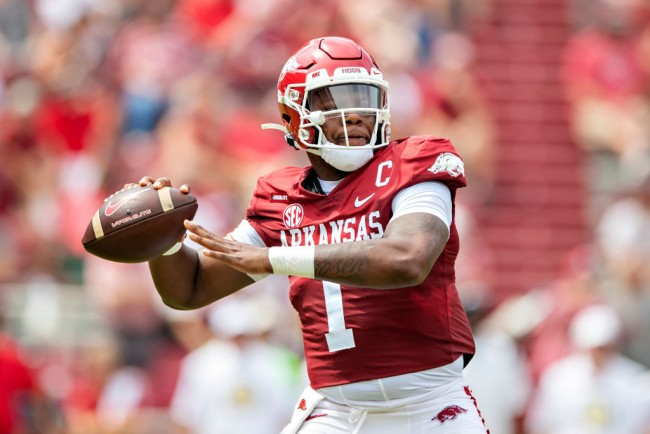 FAYETTEVILLE, AR – KJ Jefferson of the Arkansas Razorbacks throws a pass in the first half of a game against the Rice Owls at the Donald W. Reynolds Razorback Stadium on September 4, 2021 in Fayetteville, Arkansas. (Photo : Wesley Hitt/Getty Images)

No. 7 Texas A&M Aggies and No. 16 Arkansas Razorbacks will put their unbeaten records on the line when they square off this coming Saturday in a mouth-watering SEC clash. Both teams are playing some outstanding football of late, so expect a gripping showdown between these two conference rivals.

The Texas A&M Aggies are brimming with confidence heading into their clash with Arkansas after extending their winning streak to 10 games with a 34-0 demolition of the New Mexico Lobos on Saturday. The Aggies have started the season like a house on fire, winning their first three assignments by an average of 22.7 points.

Providing the impetus for Texas A&M’s sizzling start has been its phenomenal defense. The Tigers are allowing just 5.67 points per game this season, the lowest in the entire FBS. They shut out New Mexico in Week 3, holding the Lobos to just 122 total yards.

For the Aggies to preserve their unbeaten record against the Razorbacks, they will need to put the clamps on KJ Jefferson. The Arkansas quarterback has racked up 632 yards passing with four touchdowns through the air and 180 yards rushing on the ground. That won’t faze the Aggies, though, who are ninth in the FBS in total defense, allowing just 239.3 yards per game this season.

It is crucial for Texas A&M that quarterback Zach Calzada has a solid game on Saturday. Calzada has been promoted to QB1 after starter Haynes King broke his leg. Calzada impressed in his first start for A&M, completing 19 of 33 passes for 275 yards with three touchdowns and one interception.

Arkansas just can’t be stopped right now. On Saturday, the Razorbacks improved their season record to 3-0 after thrashing the Georgia Southern Eagles, 45-10. This is the first time since 2016 that Arkansas has started the season with three consecutive victories.

Things will become more challenging for the Razorbacks as the red-hot Aggies are standing in their way in their next game. They have struggled mightily against Texas A&M lately, losing each of their last nine meetings against the Aggies, a streak which began in 2012.

For Arkansas to record its first 4-0 start since 2003, the Razorbacks will need KJ Jefferson to stand tall once again. Last week, he was superb against Georgia Southern, completing 13 of 23 passes for 366 yards and three touchdowns.

Jefferson made history with that performance becoming the first Arkansas quarterback since 2015 to record at least 350 passing yards and three touchdowns in a game without throwing a single interception.

However, Jefferson will have his work cut out for him against a Texas A&M secondary that has yet to allow a 100-yard passer or a touchdown through the air this season. The Aggies lead the nation in passing defense, allowing just 77.3 yards per game this campaign.

Top Upcoming Robotics Competitions for Enthusiasts to Attend in 2022