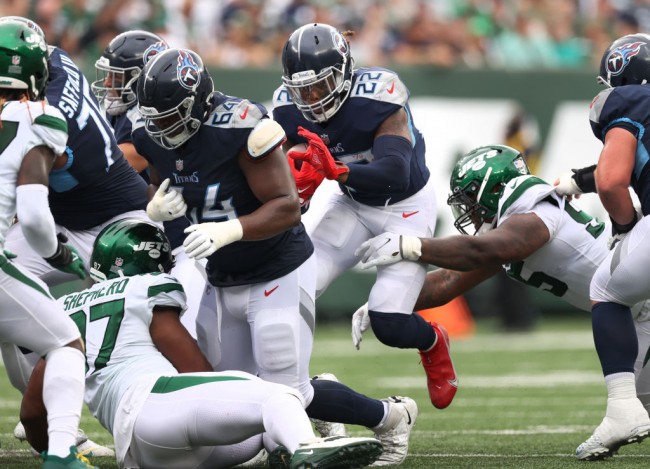 EAST RUTHERFORD, NEW JERSEY – Derrick Henry (#22) of the Tennessee Titans runs for a touchdown during the fourth quarter against the New York Jets at the MetLife Stadium on October 03, 2021 in East Rutherford, New Jersey. (Photo : Al Bello/Getty Images)

The Tennesee Titans have won their last three games against the Jacksonville Jaguars. They hope to extend that winning streak to four games when they face the Jaguars in Week 5. Who will emerge victorious in the Titans vs Jaguars clash? Check our preview to see who has the edge in this AFC South showdown.

The Tennessee Titans suffered a shock defeat in Week 4, losing to the hapless New York Jets, 27-24. The Titans entered the game with high expectations as New York was winless heading into their clash. However, they struggled offensively, handing the Jets their first victory in the Robert Saleh and Zach Wilson era.

The Titans will look to get their season back on track when they face the Jaguars this coming Sunday. They will fancy their chances of doing just that as they have fared extremely well against Jacksonville of late.

The Titans have won seven of their last ten meetings with the Jags, including their last three matchups. In their meeting last December, Derrick Henry was unstoppable against Jacksonville, running for 215 yards and two touchdowns.

Derrick Henry is the mayor of Duval County #JagsHateWeek pic.twitter.com/CkRFP1a2NT

Henry loves playing against the Jags, rushing for 1,013 yards and 11 touchdowns in his career against Jacksonville. He leads the league in rushing this season with 510 yards. Henry has run for at least 150 yards in his last three road games.

Things are going from bad to worse for the woeful Jacksonville Jaguars as they crashed to their 19th consecutive defeat last Thursday with a gut-wrenching 24-21 loss to the Cincinnati Bengals. It was a disappointing defeat for the Jags, who led 14-0 at the half-time break.

Controversy then hounded the Jaguars following that loss after Urban Meyer found himself in hot water for his inexcusable behavior in an Ohio bar. The 57-year-old was captured on camera with a young woman dancing between his legs while sitting on a barstool. A video also surfaced of Meyer touching the woman’s bottom.

Meyer got a slap on the wrist from team owner Shad Khan, who publicly reprimanded him for his conduct but didn’t fire the embattled coach. Meyer will look to make amends this coming Sunday against AFC South rivals Tennessee.

For the Jaguars to snap their losing streak against the Titans, they will need Trevor Lawrence to replicate his play against the Bengals. He was superb in the loss to Cincinnati, completing 17 of 24 passes for 204 yards.

Lawrence also ran for 36 yards and a score on eight carries. Even though he did not throw a touchdown in that game, the most important part of Lawrence’s performance was that he did not record a single interception. That ended his streak of games with multiple picks.