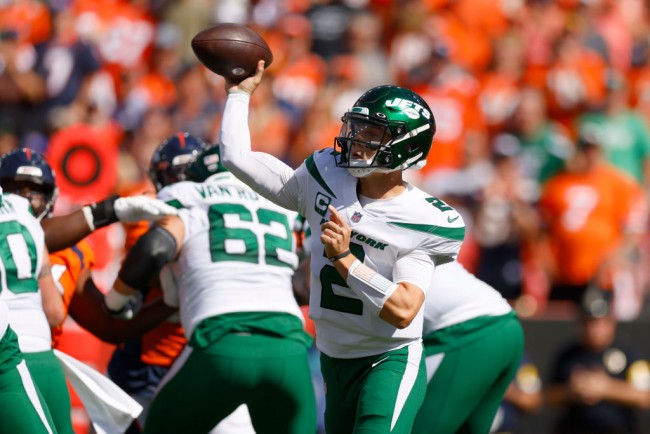 DENVER, COLORADO – Quarterback Zach Wilson (#2) of the New York Jets passes the ball in the first quarter of the game against the Denver Broncos at the Empower Field At Mile High on September 26, 2021 in Denver, Colorado. (Photo : Justin Edmonds/Getty Images)

Tennessee extended its winning streak to two games with a 25-16 victory over the Indianapolis Colts. The Titans will look to make it three wins in a row when they face Zach Wilson and the rest of the struggling New York Jets in Week 4. Here’s our preview of this Titans vs Jets game for an in-depth breakdown of this match.

Injury problems are mounting for the Tennessee Titans ahead of their Week 4 clash with the New York Jets. Outside linebackers Rashad Weaver and Derick Roberson were placed on injured reserve two days after the Titans’ victory against the Indianapolis Colts.

The good news for the Titans is that their running game is firing on all cylinders right now. They racked up 180 yards rushing in the win against the Colts, 113 of which came from Derrick Henry.

Derrick Henry is just not fair 🤯

He leads the league in rushing this season, recording 353 yards and three touchdowns on the ground through the Titans’ first three games. He will look to punish a Jets side that is allowing 110.7 rushing yards per game this season, 14th in the NFL.

The losses keep on coming for the New York Jets this season. The Gang Green stumbled to their third consecutive defeat on Sunday with an embarrassing 26-0 loss to the Denver Broncos. It was a humiliating defeat for the Jets, who have now lost 12 straight games in September.

They are just the third team in the history of the NFL to have recorded such a losing rut in September, joining the 1994-97 Saints and the 2007-10 Rams in that infamous list. What made the defeat such a bitter pill to swallow for Jets fans was how their team lost. The Jets laid an egg on the scoreboard, the third time they have failed to score any points against the Broncos in an NFL game.

“3 weeks in, I feel like I learned a lot. And I feel like there’s a light at the end of the tunnel as far as where we’re trying to get”

Things are bound to get more challenging for the Jets as they will next face the red-hot Tennessee Titans in Week 4. For the Jets to record a stunning upset, they will need to get a much-improved play from rookie quarterback Zach Wilson.

He struggled once again in the loss to the Broncos, throwing just 160 yards and two interceptions. The Jets’ offensive line offered little protection on Wilson, with the former BYU standout getting sacked five times on Sunday.

Tennessee wins and covers the spread.

The Smart Cities of the Future: 10 Must-Have Technologies