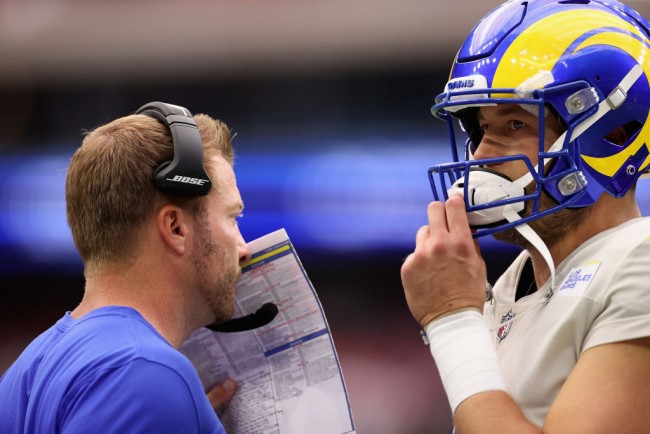 Two division leaders will square off on Sunday Night Football in Week 9. Can Matthew Stafford continue his scorching start against Tennessee, or will Ryan Tannehill hand him and the rest of the Rams their second defeat of the season? Here’s our preview for a breakdown of this Titans vs Rams clash.

The Tennessee Titans delivered a huge statement win in Week 8, beating the Indianapolis Colts on the road to extend their lead over their main rivals in the AFC South standings. The Titans now hold a three-game advantage in their division after recording a thrilling 34-31 come-from-behind win over the Colts in overtime.

The Titans showed incredible resolve in this contest, battling back from an early 14-0 deficit. Tennessee’s defense stood tall in this divisional matchup, recording two critical interceptions against Carson Wentz late in regulation and in overtime to grab the win.

Tennessee recorded its first pick-six in 38 games late in the fourth quarter, with rookie Elijah Molden handing the Titans a 31-24 lead. The Colts answered back quickly, though, with Jonathan Taylor scoring the game-tying touchdown after safety Kevin Byard was called for defensive pass interference.

Byard made amends, however, in overtime, intercepting Wentz’s pass to Michael Pittman Jr. on the third overtime series. Byard took the ball to the Colts 32, setting up Tennessee’s eventual game-winning field goal.

The Los Angeles Rams extended their winning streak to four games on Sunday with a resounding 38-22 victory over the Houston Texans. It was a critical victory for the Rams, who grabbed a share of the lead with the Arizona Cardinals atop the NFC West standings, with both teams carrying similar 7-1 records.

Matthew Stafford led the Rams in this one-sided win, completing 21 of 32 passes for 305 yards with three touchdowns and no interceptions. Cooper Kupp was his favorite target in Week 8, with the Rams wide receiver catching seven passes for 115 yards and a touchdown. Kupp is making a solid case that he is the NFL’s best wide receiver as he leads the league not only in touchdowns (10) but also in receiving yards (924) and receptions (63).

Stafford also got much-needed help from Darrell Henderson, who rushed for 90 yards and scored two touchdowns. In the opening half, the Rams dominated right from the get-go, outscoring the Texans, 24-0. They extended that lead to 38-0 at the end of the third quarter before settling for a 16-point win in the end.

The Rams have now won 43 consecutive games, including the playoffs when leading after the first two quarters. That is the second-longest streak in the history of the NFL, behind only the Packers’ record of 49 games.