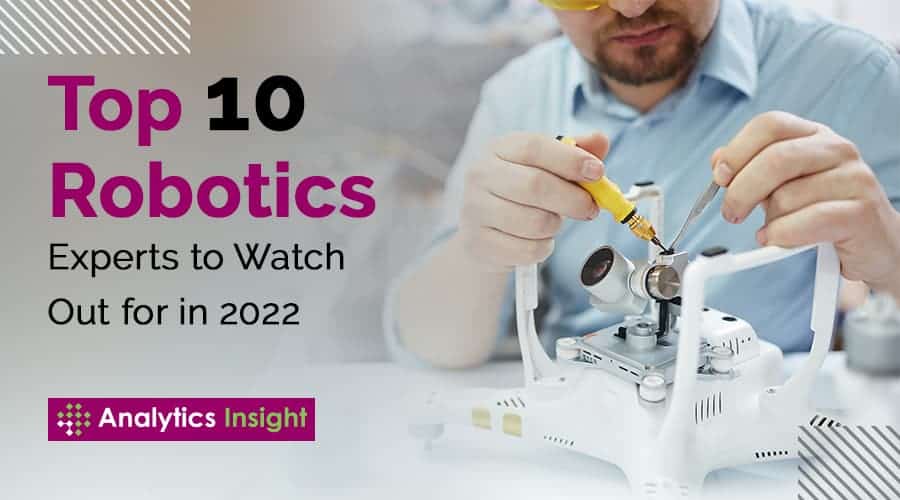 Robotics is thriving in different kinds of industries in recent years, especially in Industry 4.0. The combination of cutting-edge technologies such as robotics, artificial intelligence, IoT, and many more have developed multiple robots for different purposes. The education and research in robotics are increasing at an increasing rate owing to several pioneers in robotics. Their expertise in robotics is largely contributing to the robotics domain for more improvements and advancements in robots. Let’s explore some of the top robotics experts to watch out for in 2022 for their in-depth knowledge of this domain.

Prof. Dieter Fox is one of the top ten robotics experts in the world who is currently a Senior Director of Robotics Research at NVIDIA. His specialization is in robotics with the combination of artificial intelligence, machine learning, and computer vision. He is known in this domain for his publications in over 200 technical papers as well as a co-author of Probabilistic Robotics. Prof. Fox is currently a Fellow of the IEEE and the AAAI and on partial leave from the University of Washington. He has received the RAS Pioneer Award in 2020 for his immense contributions to RGB-D perception, machine learning in robotics, as well as bridging the gap between academic and industrial robotics research.

Prof. John J. Leonard is a well-known robotics expert for his research on the problems of navigation and mapping for autonomous mobile robots. He is one of the pioneers in robotics who has formulated the problem of SLAM (Simultaneous Localization And Mapping) in the mobile robotics research community. These mobile robots can operate in underwater and terrestrial environments for Navy missions. He has received multiple awards for his recognition and contribution to mobile robots.

Steve Cousins is one of the robotics experts to watch out for in 2022 because of his role in Savioke. He is the Founder and CEO of this robotics company that creates autonomous robotic technology to help the service industry across the world. His contributions to the robotics domain are immense— he looked after the creation of the open-source software known as Robot Operating System (ROS) which is a standard tool among robotics researchers. He works in the Robots for Humanity project to advance the use of robots in Industry 4.0.

Prof. Masayuki Inaba is currently a professor of the Department of Creative Informatics and the Department of Mechano-Informatics of the graduate school of Information Science and Technology of Tokyo University. He is focused on key technologies of robotic systems and the research infrastructure to develop advanced robots. He is considered as one of the pioneers in robotics for his contributions to this domain.

Sachin Chitta is the Director of Robotics Research at Autodesk to lead a team of robotics researchers in the field of robotics and artificial intelligence. He was the Founder and CEO at Kinema Systems that was focused on the world’s first deep-learning-based solutions for robotic depalletizing for logistics. He sold the company to Boston Dynamics, a pioneer company in robotics for its wide range of robotics. Sachin is one of the robotics experts to watch out for in 2022 through the services of Autodesk for multiple robots.

Prof. Jun Ho-Oh is known as a robotics expert in Korea for his in-depth knowledge of robotics and the functions of robots. He has successfully developed the first Korean humanoid robot known as Hubo and a series of these robots known as Albert Hubo, Hubo FX-1, Hubo II, and DRC-HUBO. He is the Samsung Chair Professor as well as a pioneer member of the National Academy of Engineering of Korea for his major breakthroughs in robotics.

Marc Raibert is one of the pioneers in robotics with his immense contribution to the robotics domain with Boston Dynamics. Marc is the Founder, former CEO, and currently the Chairman of Boston Dynamics. He was a professor of Electrical Engineering and Computer Science at MIT. The company is focused on developing some advanced robots for industrial uses like Atlas, Handle, Spot, and BigDog. His expertise in robotics is providing more advanced robots to the world for better productivity and is one of the robotics experts to watch out for in 2022.

Prof. Peter Corke is a well-known robotics expert for his work on field robotics, online robot academy, and the robotics toolbox and machine vision toolbox for MATLAB. He is popular for being a robotics researcher a distinguished professor of robotic vision at the Queensland University of Technology. He has created an open-source software for teaching and research as well as authored the best-selling textbook known as Robotics Vision and Control. Peter is currently a Chief Scientist of Dorabot and the world is expecting some more contributions to the robotics domain.

Melonee Wise is the VP of Robotics Automation of Zebra Technologies and the former CEO of Fetch Robotics and Unbounded Robotics. Her expertise in robotics showed a lot of work in designing, building, and programming robotic hardware. She has developed algorithms, libraries, and hardware for autonomous boats, cars, and personal robot platforms. She calls herself the robotic ninja and is named the overall 2021 Supply Chain Woman of the Year. She is the driving force behind the development and deployment of reliable autonomous robots across the supply chain industry. Melonee has contributed a lot post-pandemic with robotic strategies and is one of the robotics experts to look forward to in 2022.

David Hanson is focused on developing robots with the world’s most human-like appearances. He is known for integrating figurative arts with robotics engineering and facial expression mechanisms of artificial intelligence. David is popular for authoring two books including humanizing robots with multiple patents. His expertise in robotics has made him one of the top robotics experts to look out for in 2022 with more advanced robots for multiple purposes.

How is Blockchain Used in Business Intelligence?