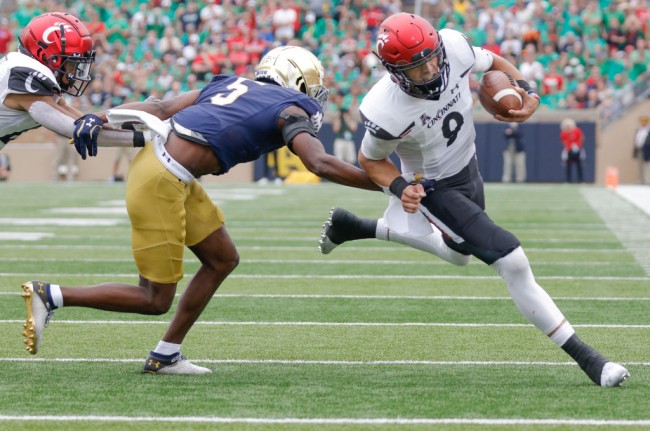 SOUTH BEND, IN – Desmond Ridder (#9) of the Cincinnati Bearcats runs the ball as Cam Hart (#5) of the Notre Dame Fighting Irish reaches for the tackle during the first half at the Notre Dame Stadium on October 2, 2021 in South Bend, Indiana. (Photo : Michael Hickey/Getty Images)

The Cincinnati Bearcats jumped to No. 3 in the AP Top 25 poll after their massive win over Temple in Week 6. They will look to cement their standing in the top 3 this Saturday when they host the UCF Knights. Here’s our preview to see who has the edge in this UCF vs Cincinnati Week 7 game.

The UCF Knights finally ended their two-game losing skid with a 20-16 victory over East Carolina in Week 6. It was a huge bounce-back win for the Knights, who suffered narrow defeats to Louisville and Navy in Weeks 3 and 4. With the victory, UCF improved its record this season to 3-2.

They will look to make it back-to-back wins when they take on the red-hot Cincinnati Bearcats in Week 7. One guy who needs to step up for UCF in this matchup is Johnny Richardson. He wreaked havoc against East Carolina’s defensive line, rushing for 104 yards and a touchdown on 16 carries.

Mark-Antony Richards also contributed for the Knights in that game, running for 58 yards and a score on six carries. Richardson and Richards will look to dissect a Cincinnati defensive line that’s 33rd in the FBS in rushing defense, allowing 116.6 yards per game on the ground this season.

#UCF coach Gus Malzahn shares his thoughts on true freshman QB Mikey Keene’s performance and his performance down the stretch vs. ECU in a win.

“He’s going to be a big time quarterback before it’s all said and done.” pic.twitter.com/ADXuB9LbWo

It is important for UCF that Mikey Keene gets his game going against Cincinnati. Keene completed 23 of 35 passes for 194 yards with no touchdowns and one interception in the win against East Carolina. After Dillon Gabriel broke his left clavicle in the loss to Louisville, Keene had been installed as the starter.

Momentum is with Cincinnati heading into Saturday’s showdown against UCF after the Bearcats destroyed the Temple Owls, 52-3, in Week 6. It was a resounding victory by the Bearcats, who improved their season record to 5-0. They had won their first five outings by an average of 28.8 points.

Providing the impetus for the Bearcats’ hot start is their outstanding defense. They are sixth in the nation in scoring defense, allowing just 14.5 points per game this campaign. The Bearcats were simply ruthless against the Owls, holding Temple to just 235 total yards in the rout. Temple found it difficult to move the chains, especially on late downs, going 3 of 13 on third down and 0 for 2 on fourth down opportunities against Cincinnati.

No. 3 ranked @GoBearcatsFB has its highest ranking-ever in school history 🔥

For the Bearcats to preserve their unbeaten record against the Knights, they will need Desmond Ridder to continue his superb play. He completed 22 of 30 passes for 259 yards with three touchdowns in the win against Temple. Ridder has thrown for 1,304 yards and 12 touchdowns with two interceptions through Cincinnati’s first five games, putting himself in the Heisman trophy discussions.

Manchester United and Chelsea to miss out on Serie A star?

SphynxSwap Announced the Release of Its Exclusive NFT Collection