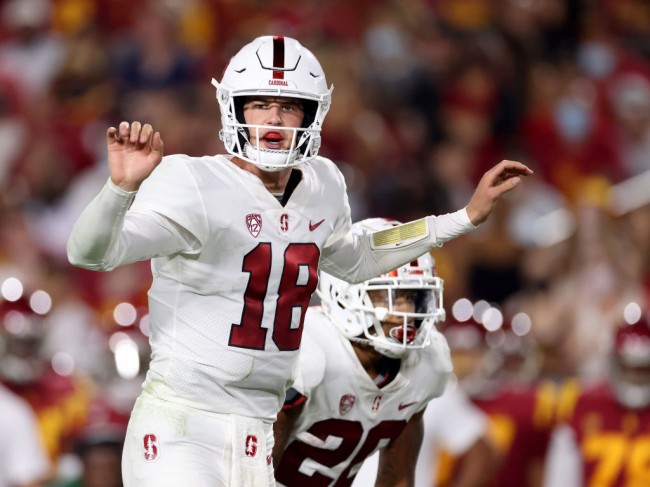 LOS ANGELES, CALIFORNIA – Tanner McKee (#18) of the Stanford Cardinal calls a play at the line of scrimmage in front of Austin Jones (#20) during the second quarter against the USC Trojans at the Los Angeles Memorial Coliseum on September 11, 2021 in Los Angeles, California. (Photo : Harry How/Getty Images)

On Saturday, Stanford extended its winning streak to two games with a comprehensive 41-23 victory over Vanderbilt. The Cardinal will look to make it three wins in a row when they face the UCLA Bruins in their first home game since November of last year. Who will prevail in this UCLA vs Stanford clash? Check our preview to see who has the edge.

The UCLA Bruins had their two-game winning streak snapped on Saturday with a gut-wrenching 40-37 loss to Fresno State. The Bruins had no answer for Jake Haener, who threw for 455 yards, including the game-winning touchdown pass to Jalen Cropper with 14 seconds left.

It won’t get any easier for the Bruins in Week 4 as they will next face Stanford. UCLA has lost 12 of its last 13 meetings with Stanford in their series. The Bruins’ only victory over the Cardinal since the start of the 2009 season came in 2019 when UCLA defeated Stanford, 34-16, on the road.

Dorian Thompson-Robinson starred for UCLA in that win, throwing two touchdown passes and running for a score in the first half. Thompson-Robinson injured his leg in UCLA’s last meeting with Stanford in 2020 as the Bruins suffered a 48-47 loss in double overtime.

Thompson-Robinson is expected to target Kyle Philips in this marquee clash. He was sensational in the loss to Fresno State, grabbing nine catches for 113 yards and two touchdowns last week. He also caught two touchdowns in UCLA’s 2019 win over Stanford.

The Stanford Cardinal is finally heading home. For the first time in 10 months, Stanford will play a game in front of its home fans as the Cardinal host the Bruins this coming Saturday. They ended last season on a very long road trip with COVID-19 protocols forcing them to leave campus.

Stanford then started this season with a neutral site game against Kansas State in Texas before facing Southern California and Vanderbilt. The Cardinal fared well during that stretch, winning all six of their actual road games and only suffering a defeat to Kansas State.

Saturday’s meeting with UCLA is Stanford’s first home game since November 14, when the Cardinal lost to Colorado, 35-32. Momentum is with Stanford heading into this showdown as the Cardinal have won each of their last two games against USC and Vanderbilt.

Leading the way for Stanford in this two-game winning streak is Tanner McKee. He has been playing inspired football since being named the Cardinal’s starting quarterback in Week 2, completing 35 of 52 passes for 452 yards and four touchdowns during Stanford’s unbeaten run.

McKee also has two rushing touchdowns in his last two games. McKee’s six total touchdowns are the most recorded by a Stanford quarterback in his first two starts.

Stanford pulls off the upset in front of its home fans.

How Can AI and Data Science Make IPL 2021 More Interesting?