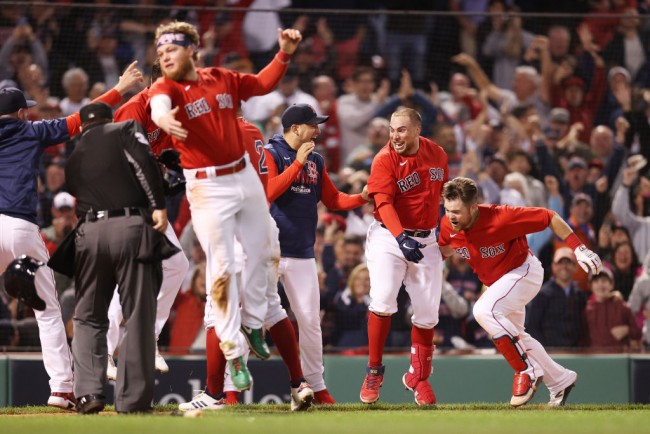 BOSTON, MASSACHUSETTS – Christian Vazquez (#7) of the Boston Red Sox celebrates his game winning two-run homerun in the 13th inning against the Tampa Bay Rays during Game 3 of the American League Division Series at the Fenway Park on October 10, 2021 in Boston, Massachusetts. (Photo : Maddie Meyer/Getty Images)

The Boston Red Sox moved to within a victory of reaching the American League Championship Series after winning Game 3 of the ALDS in dramatic fashion against the Tampa Bay Rays. Christian Vazquez blasted a two-run walk-off homer in the bottom of the 13th inning to give the Red Sox a pulsating 6-4 win and hand them a commanding 2-1 series lead heading into Game 4.

It was a heartbreaking loss for the Rays, who were stung by a controversial call in the top half of the 13th inning. Tampa Bay thought it had taken the lead after Kevin Kiermaier’s extra-base hit found the gap in right center and struck the Fenway Park right-field fence.

Just when Yandy Diaz was about to score and give the Rays a 5-4 edge, the Red Sox were given a new lease on life. Kiermaier’s hit deflected off Boston right fielder Hunter Renfroe’s right hip as the latter tried to gather the ball. It then skipped over the fence, denying Kiermaier a sure RBI base hit.

Kevin Kiermaier ends up hitting a ground rule double. What a break for the Red Sox if this holds… pic.twitter.com/JxLaaBrAZY

The umpires deliberated for minutes before ruling that Kiermaier’s hit would be a ground-rule double and that Diaz will have to return to third base. Instead of having a 5-4 lead with a runner at least on second base at that stage, the game remained tied at four runs apiece with Kiermaier and Diaz on second and third base, respectively.

Both runners were left stranded, with Zunino striking out the following at-bat. That sequence of events proved costly for the Rays as the Red Sox pounced quickly at the bottom half of the 13th inning.

After Renfroe manufactured a one-out walk, Vazquez stole the show, hitting a mammoth blast off Rays reliever Luis Patino into the left field seats above the Green Monster, sending Red Sox fans into a frenzy.

The Rays understandably looked dejected as Vazquez and Renfroe rounded the bases, knowing fully well a major opportunity slipped away from them. Kiermaier was shocked the Rays were not able to put some runs on the board with his hit, saying, “I can’t believe that happened or we don’t get the chance to score right there.”

Kiermaier said the events leading to Sunday’s loss were a heartbreaker. The Rays cannot afford to wallow in self-pity, though, with Game 4 just a few hours away. They have yet to announce their starting pitcher for this must-win showdown.

Eduardo Rodriguez, the Game 1 starter for the Red Sox, will take the mound for Boston in Game 4. Nick Pivetta was supposed to start for the Red Sox in Game 4, but he was called into action in Game 3, with the right-hander holding Tampa Bay scoreless through four superb relief innings.

Top 10 Trending Cryptocurrency Jobs to Apply in October in India