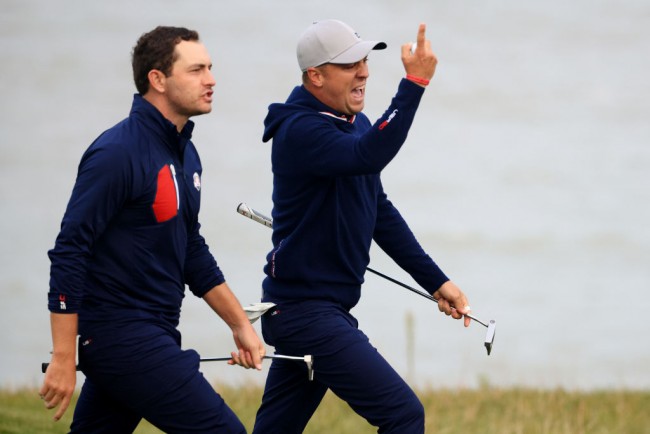 The Americans will head into Day 2 of the 2021 Ryder Cup with momentum on their side after dominating Team Europe on both sessions of Day 1. Team USA recorded 3-1 wins on Friday’s foursomes and four-balls to establish a 6-2 advantage over Europe after the opening day.

The Americans need to score just 8.5 points in their remaining matches to win the Ryder Cup, while the Europeans need at least 12 more points to ensure they will retain the trophy. Europe has fared extremely well in this competition of late, winning nine of the last 12 editions, including four out of the last five.

Team USA got off to a fantastic start in the morning foursomes, winning three of the four matches contested at Whistling Straits. Dustin Johnson and Collin Morikawa opened the scoring for the United States, defeating Paul Casey and Viktor Hovland, 3&2.

Brooks Koepka and Daniel Berger followed suit, beating Lee Westwood and Matt Fitzpatrick, 2&1. Ryder Cup rookies Patrick Cantlay and Xander Schauffele then pulled off a huge win for Team USA in the morning session, crushing veterans Rory McIlroy and Ian Poulter, 5&3. The lone European point in the foursomes came from the Spanish pair of Sergio Garcia and Jon Rahm, who outclassed Justin Thomas and Jordan Spieth, 3&1, in the opening match.

Tony Finau and Harris English gave the Americans their second win of the afternoon, thrashing four-time major champion Rory McIlroy and 2019 British Open winner Shane Lowry, 4&3. It was the first time in McIlroy’s career that he has lost two Ryder Cup matches on the same day.

Action will resume on Saturday morning with the second foursomes session. The opening match will feature USA’s Brooks Koepka and Daniel Berger against Europe’s Sergio Garcia and Jon Rahm. Steve Stricker will then send out the winning pair of Dustin Johnson and Collin Morikawa against Europe’s Paul Casey and Tyrrell Hatton in Match 2.

Justin Thomas and Jordan Spieth will look to bounce back from their opening day defeat when they lock horns with Viktor Hovland & Bernd Wiesberger in Match 3. Patrick Cantlay and Xander Schauffele will then play in the anchor foursomes match against Europe’s Lee Westwood & Matt Fitzpatrick.

Liverpool to swoop for West Ham United star in January?

How To Build An Effective Big Data Strategy?