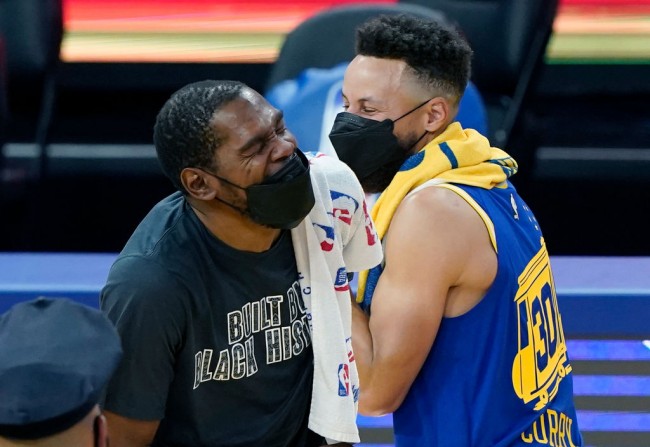 SAN FRANCISCO, CALIFORNIA – FEBRUARY 13: Kevin Durant #7 of the Brooklyn Nets and Stephen Curry #30 of the Golden State Warriors together laughing after the Nets defeated the Warriors 134-117 in an NBA basketball game at Chase Center on February 13, 2021 in San Francisco, California. (Photo : Thearon W. Henderson/Getty Images)

Two of the league’s hottest teams will lock horns on Tuesday night with the Golden State Warriors taking on the Brooklyn Nets at Barclays Center. All eyes will be on former teammates Kevin Durant and Stephen Curry as they square off in what could be an early NBA Finals preview.

Durant and Curry were named NBA Players of the Week ahead of their meeting after producing stunning displays for their respective teams in Week 4. Durant led the Nets to a 3-1 record during that week, averaging 32.3 points and 7.8 rebounds through four games and shooting at a high 62.9 percent clip. The 11-time All-Star scored at least 30 points in three of those four games, including a 38-point outing against the Chicago Bulls in a 118-95 defeat.

Steph Curry pointed to the crowd before this 3 went in last night. 😂

Curry’s numbers were outstanding as well, averaging 34.8 points, 7.8 assists and 5.5 rebounds in four games played, leading the Warriors to a 3-1 record during that span. Curry had two games with at least 40 points during that period, scoring 40 against the Chicago Bulls and exploding for 50 against the Atlanta Hawks.

Durant has carried the scoring cudgels for the Nets with Kyrie Irving still sidelined because of his reluctance to get the COVID-19 vaccine. The three-time Olympic champion has scored at least 20 points in all 14 games of the Nets this campaign. He needs to score 20 points against the Warriors to tie Karl Malone’s record for the longest 20-point streak by a player age 33 or older to start the season.

What makes Durant’s scorching start even more impressive is the fact that he is dealing with a shoulder injury at the moment. Durant told reporters after the win against the Oklahoma City Thunder that he is getting treatment on his right shoulder. Durant said “It’s solid. A little sore here and there, but I played, didn’t get in the way too much. Keep getting treatment and take it a day at a time.”

Kevin Durant allows himself to reflect on his OKC days after the win vs. Thunder.
“You think about your foundation, where you built yourself up as a pro and this was definitely the spot for me….” pic.twitter.com/p742iFOQG8

Durant’s shooting shoulder looked fine against the Thunder as he torched his former team in the 120-96 win. He scored 33 points on 9 of 17 shooting from the field and 13 of 14 from the free throw line. Durant has been shooting exceptionally well of late, racking up a 52% field goal clip or better in each of Brooklyn’s last five games.

Nets head coach Steve Nash paid tribute to his ward, “He’s got a little tweak. But the ball still goes in the hole so I think he’s hanging in there.” Nash added that they don’t expect this type of injury to get worse so Durant is playing through it.